The Ichisonga is a pachyderm-slayer from the folklore of the Lambas of Zambia, usually found in the Kafue River. It is a herbivorous water beast that resembles a rhinoceros and has a horn on its forehead.

Although a grass-eater, the ichisonga has a special hatred for the hippopotamus. If an ichisonga hears a hippo, it leaves the Kafue River, traveling along the bank so the hippo does not scent it. Then it re-enters the water, goes for the largest bull hippo, and stabs it to death with its horn.

If an elephant is killed nearby, the ichisonga will roar and drive the hunters away from the carcass. It then stays near the elephant’s remains for days until the carcass rots. The ichisonga is motivated by uŵulwishya – jealousy. 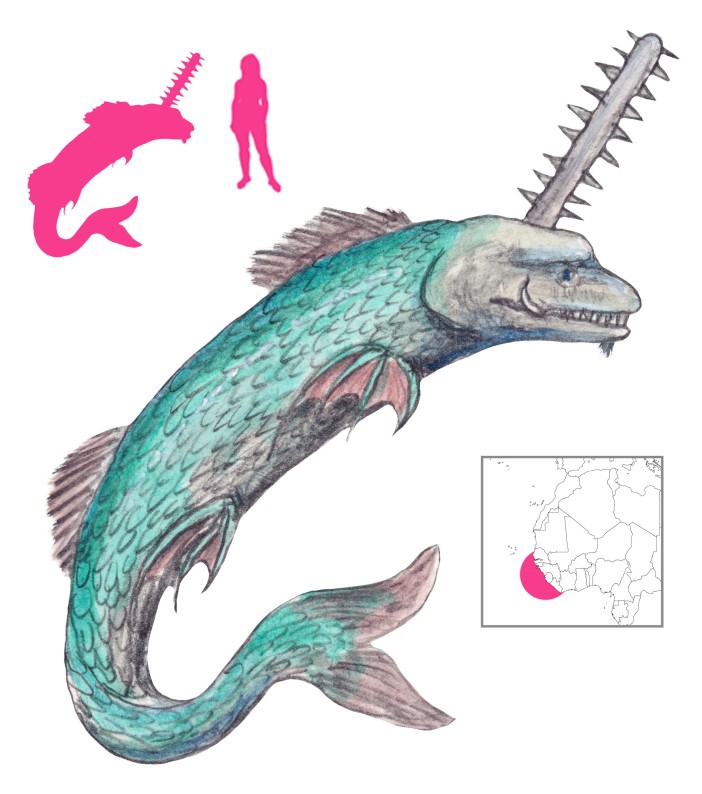 Thevet describes the monstrous Utelif as a fish found along the African coast, from Guinea to Ethiopia. It has a three-foot long, four-finger wide saw on its forehead. This weapon is very sharp on both sides. It is much like a killer whale, but its skin is scaly instead of leathery. Thevet includes a drawing of it and contrasts it with that of Rondelet, who was sadly mistaken in putting the saw on the creature’s nose.

Ambroise Paré predictably copies Thevet’s account but changes the name to uletif. Like Thevet, he is in possession of the remarkable saw, a serrated horn weighing five pounds with fifty-one sharp teeth divided on either side (25 on one, 26 on the other). It is colored like a sole above and is white below. As the uletif is believed to be a marine unicorn, its horn has the same antivenomous qualities as that of the unicorn. He dismisses the popular claim that the saw is a snake’s tongue.

Aldrovandi includes the likeness of the utelif in his discussion of the Pristis or sawfish.

The only description of the piscivorous Camphruch is provided by Thevet, who places this unusual unicorn in the Maluku Islands. Paré copies Thevet’s account but locates his “camphur” in Ethiopia, on the Isle of Molucca (!). Aldrovandi refers to the “camphurch”.

The camphruch is amphibious, living on land and in water like a crocodile. It is as big as a doe and has a thick grayish mane around the neck. The single horn on its forehead is three and a half feet long, as thick as a man’s arm at its thickest, and is movable like an Indian rooster’s comb. The forelegs are cloven deer’s hooves. The hindlegs are webbed like those of a goose. Camphruchs feed on fish and swim in both fresh and salt water.

Some believe that it is a species of unicorn, and that its horn neutralizes poisons. It is held in high regard in the islands, and the king of one island proudly bears the name of Camphruch – his courtiers have to make do with the names of lesser beasts, fish, and fruits.

Many of Thevet’s accounts were second or third hand. It is entirely possible that the camphruch was born from a muddle of multiple descriptions – narwhal, fur seal, beaver, goose, and antelope may have contributed. A much later dictionary entry dispenses with all that and describes the “camphur” as a single-horned Arabian donkey.

The Biasd Na Srogaig, the “Beast of the Lowering Horn”, is a unicorn or lake monster native to the lochs in the Scottish Isle of Skye. Other than a single large horn on its forehead, it had little in common with the true unicorn, being tall and clumsy, with long gangly legs and an awkward gait. Originally a nursery bogey, the biasd na srogaig eventually developed a life of its own as children brought their fears into adulthood.

Campbell derives the biasd na srogaig’s name from scrogag, a term applied to snuff horns. It is more correctly written as sgrogag, “crumpled horn”. To further muddle the etymological mixture, béist na sgrogaig has been used as synonymous with the heraldic unicorn.

Campbell, J. G. (1900) Superstitions of the Highlands and Islands of Scotland. James MacLehose and Sons, Glasgow.

Fleming, M. (2002) Not of this World: Creatures of the Supernatural in Scotland. Mercat Press, Edinburgh.

The Odontotyrannus is a massive beast found in the rivers of India, whose account has been told as one of Alexander the Great’s many exploits. Its name apparently means “tooth tyrant”, but medieval reading errors led to a variety of increasingly awkward alternate names and direct translations.

When Alexander and his men made camp by a river, they were found by an odontotyrannus coming to the water to drink. It was enormous, large enough to swallow an elephant whole, and black in color, or otherwise with a head black as pitch. It had three horns on its head. When it saw the Macedonians, it went on a rampage, killing 26 and injuring 52 of the soldiers before it was brought down by Emendus, Duke of Arcadia.

The rhinoceros is a certain candidate as the progenitor of the odontotyrannus, as is the crocodile. Confusion with Indus worms – Indian, armed with two terrible teeth, and capable of swallowing prey whole – may have led to the name, as nowhere in its description are teeth ever mentioned.

Among the wildlife to be found on Cauldron Mountain, Mount Min and Pray-and-Pass Mountain is the Xi. It is like a black water buffalo with a pig’s head, a large belly, and three-toed elephant’s feet on short legs. It has three horns, found on its nose, forehead, and crown. The nose horn does not fall off and helps it eat. Xi feed primarily on brambles, and therefore often drool blood. It may be the same animal as the Xiqu, which is a man-eating blue-black ox that makes sounds like a baby.

The Si is similar, but blue or green with a single horn weighing 1,333 pounds. Its thick skin could be used as armor.

Guo Pu mocked the Xi for its big nose, and the Si for its tough hide which ironically made it more desirable and vulnerable to human exploitation.

Both Xi and Si have been used interchangeably to refer to a number of large herbivores including oxen, yaks, and buffalo, but they are generally believed to be rhinos.

According to the Guideways through Mountains and Seas, the animal known as Bo can be found around Mount Winding-Center (identified as Mount Xue), where Huai-trees grow and where jade, realgar, and metals are plentiful. It can also be found on the plains of Mongolia and on islands in the Northern Sea. The existence of bo in the district of Shen Su was unknown to its residents, until a man called Leu Chang informed them by quoting the Shan Hai Jing for good measure.

A bo looks like a horse with a white body and a black tail, with a single horn on its head. It has tiger’s feet and saw-like tiger’s teeth, and makes a sound like a rolling drum. Bo are strict carnivores that feed upon tigers and leopards, although other sources state that leopards eat bo, and bo in turn eat tigers. A bo will protect against weapons if its flesh is eaten, or if tamed and used as a soldier.

Bo are just and honorable animals, and will reward virtuous behavior accordingly. When the wise magistrate Chung Wa of the Kingdom of Peh Chi faced an invasion by a large number of carnivorous wild animals, six bo appeared and slaughtered the beasts in thanks for the magistrate’s goodness. Duke Huan of Qi’s horse looked like a bo, according to his prime minister Guan Zhong, but presumably did not eat tigers.