“Where does the Qi-magpie dwell?” asks the Questions of Heaven. According to the Shan Hai Jing it makes its home on North Shouting Mountain. It looks like a chicken with a white head, the feet of a rat, and the claws of a tiger. It is a man-eater.

Mathieu identifies the que as the tree sparrow (Passer montanus). In the Questions of Heaven, the name Qi refers to the stars of Ursa Major, and the qidui is a quadrupedal fantastic beast. Mathieu concludes that the qique may have been a large bird of prey.

The Lili or Powercat can be found around Willow Mountain in China. It barks like a dog and looks like a pig with spurs on its feet. Its appearance foretells considerable earthwork construction in the district.

The Shuyu or Shu-fish can be found in abundance in China’s Peng River. It looks like a chicken with red feathers, and has four heads (or four eyes), six feet, and three tails. It caws like a magpie. Eating it cures melancholy.

The red color, multiplicity of appendages, and the triple (three-lobed?) tail combine to suggest a crayfish or lobster.

Mount Gouwu in China has much jade at its peak and much copper at its base. It is the dwelling-place of a beast called the Paoxiao. A Paoxiao looks like a goat with a human face armed with tiger’s teeth. Its eyes are behind its armpits (Wenxuan instead states that its mouth is under one armpit), and it has human hands. It is a man-eater that makes sounds like a baby.

Guo Pu described the paoxiao as exceedingly savage and gluttonous, liable to start biting itself before finishing its human prey. He also equated it with the ornamental taotie, a symbol of gluttony, but this connection is dubious at best.

Mathieu compares the unusual appearance of the Paoxiao with that of an animal delousing itself.

The Yin River and the Yangtze are home to large numbers of Hujiao, or tiger-dragons. A hujiao has the body of a fish with the tail of a snake, and makes a sound like a mandarin duck. It is probably the same as the cuo-fish, whose young hide in their mother’s womb, and the tiger-cuo, which has black and yellow patterns, the ears, eyes, and teeth of a tiger, and is capable of turning into a tiger. All of those are probably sharks.

Celestial Stags or Celestial Roes are neither roe stags nor are they celestial. They are Chinese spirits that haunt deep areas, corpse-demons native to the ore mines of Yunnan province. As with numerous other creatures, their name is probably phonetically derived.

Celestial stags are born from the souls of miners unfortunate enough to be trapped deep underground by cave-ins. There the trapped miners are kept alive by the breath of the earth and of the rare metals around them. Their material substance dies and rots away, but their essences cling to life and become celestial stags.

Perhaps because of this traumatic genesis, the primary goal of a celestial stag is to reach the surface. The stag will do anything it can to reach this goal. When a celestial stag meets a miner it is overjoyed and asks for tobacco. Then it begs the miner to take it to the surface. Stags will try to bribe miners by promising them the choicest veins of gold and silver. If this fails they become violent and torture miners to death.

But worse yet is the outcome if their wishes are granted. A celestial stag that reaches the open air dissolves – flesh, bones, clothes, and all – into a pestilential liquid that spreads disease and death.

The only way to escape these creatures is to kill them before they can do harm. If celestial stags are discovered, miners will wall them up in abandoned galleries. Another way out is to promise to haul the stags to the surface in a bamboo lift. Halfway up the rope is cut and the stags plummet to their death – a merciful end to their grim lives.

Borges attributes his account of the celestial stag to G. Willoughby Meade’s Chinese Ghouls and Goblins.

The Heluo Zhi Yu or Heluo-fish can be found in China’s Tower River. These unusual fishes have one head and ten bodies each, and bark like dogs. Eating them cures tumors.

According to Yang Shen’s encomium, a heluo-fish can transform itself into a Never-Old Bird, which steals rice grains from threshing pestles, falls into the mortar, and dies.

The single head and multiple tails may be a description of an octopus.

The slopes of Exceedingly Lofty Mountain in China are home to the Chouyu. It is like a rabbit but has a bird’s beak, owl’s eyes, and the tail of a snake. It falls asleep (i.e. plays dead) when it sees people. If a chouyu is seen it is an omen of a locust plague.

Mathieu identifies this animal as the armadillo, but admits with impressive understatement that China is a bit far from the neotropics… 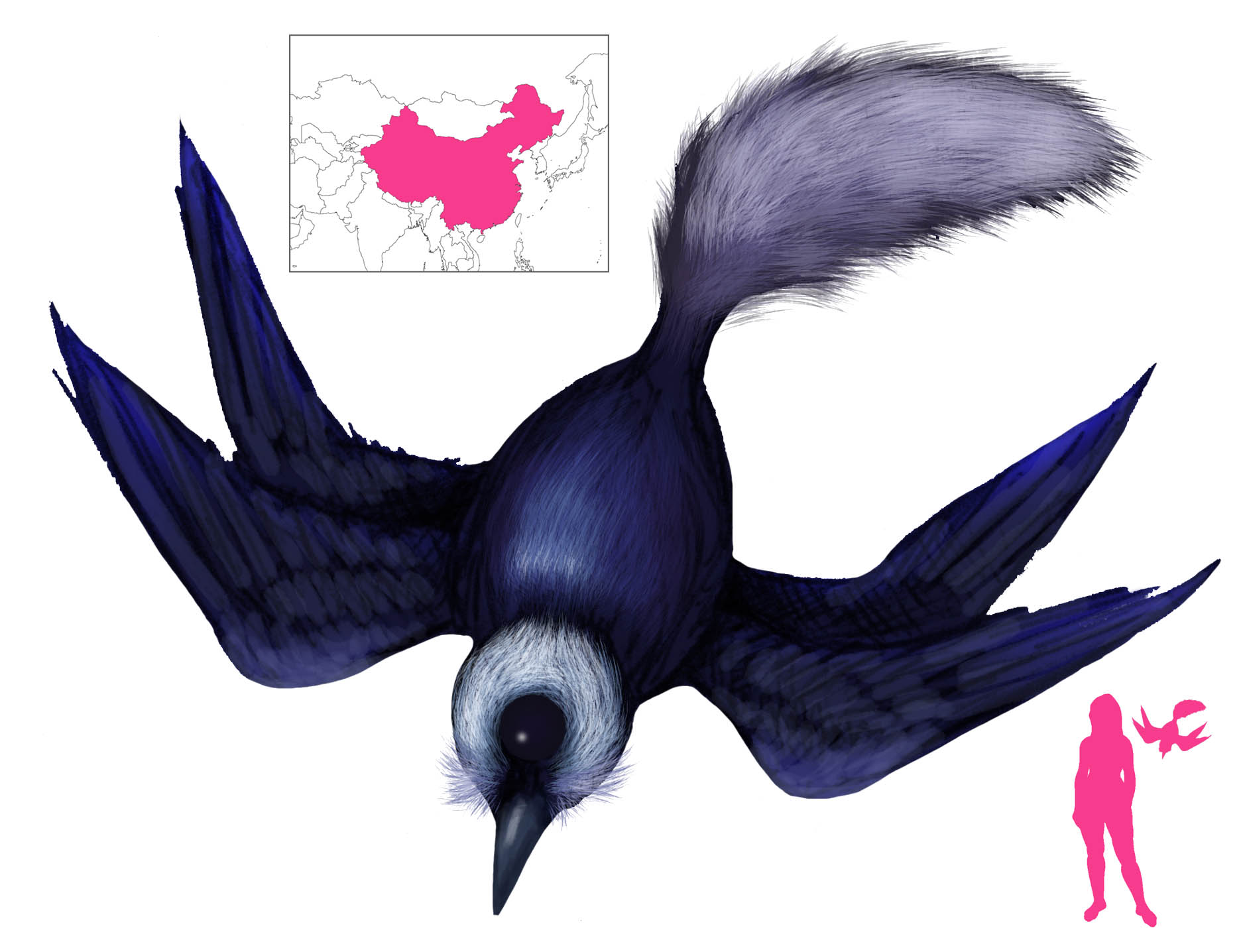 The Xiao or Raucous-Bird dwells on China’s Bridge-Channel Mountain. It is a bird with four wings, one eye, and a dog’s tail. It makes sounds like a magpie. Eating it cures abdominal pain and diarrhea. The Shan Hai Jing assures us that it resembles Kuafu the Boaster, which it does not.

It shares its name with an unrelated simian creature that resembles a Yu-Ape with longer arms. 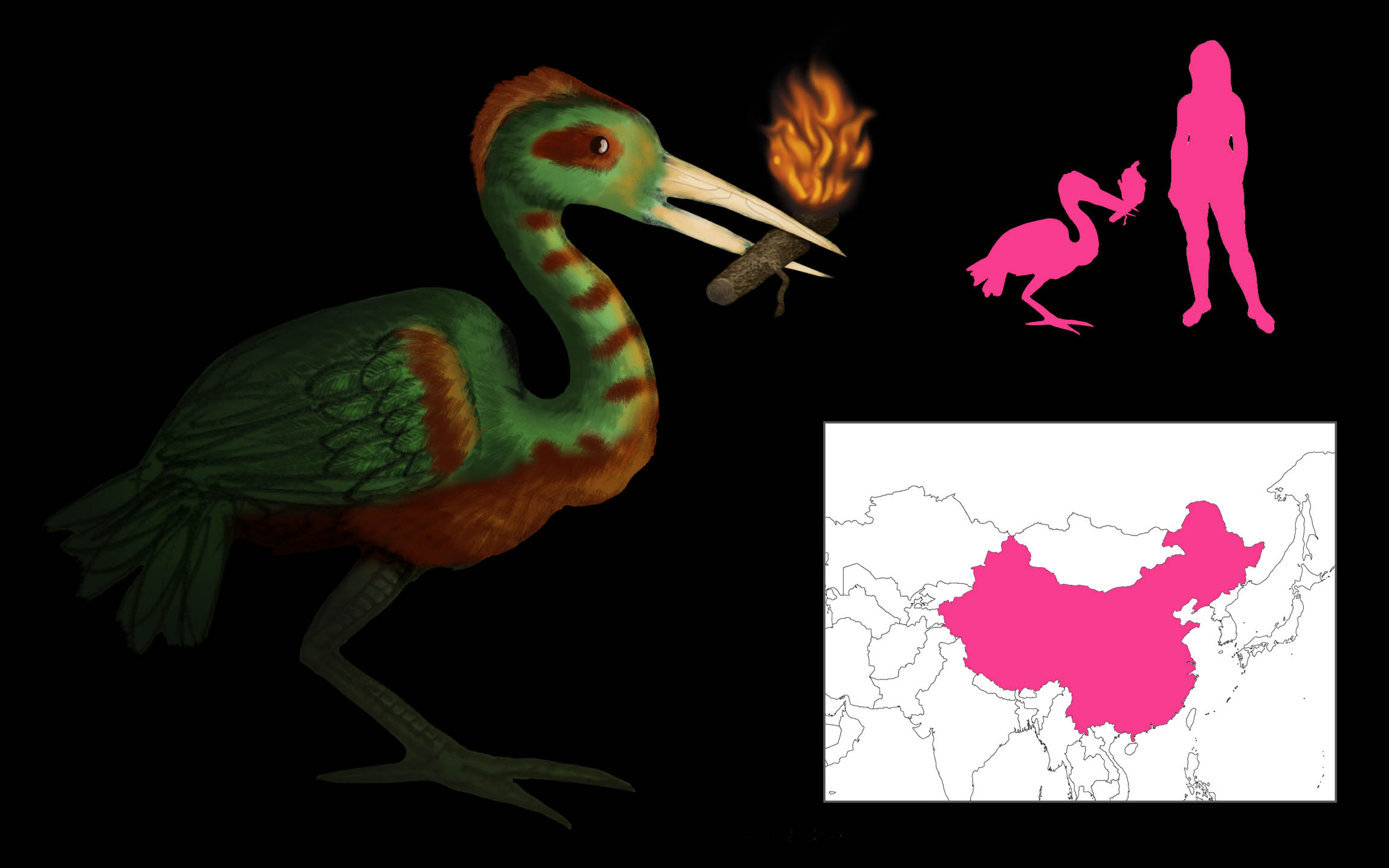 The Bifang can be found on barren Mount Zhang’e in China. It looks like a crane but has only one leg; it has a white beak and red markings on a green background. Its call sounds like its name.

A bifang is an omen of inexplicable fire starting in town. This is probably connected to its red color. It was not always an evil omen, however, as it appears as a benevolent attendant of the Yellow Thearch in the Master Hanfei, and is the divine essence of wood in the Master of Huainan.

Some sources have the bifang itself as the arsonist, using fire it carries in its beak. Mathieu equates it with the Chinese crane, whose habit of standing on one leg may have inspired the bifang’s appearance.