The Snawfus is an albino deer from the folklore of the Ozarks in Arkansas and Missouri. It has supernatural powers but is not dangerous. Some say it can jump into the treetops with ease, while others grant it feathery wings that along with to fly without making a sound, much like an owl. Some accounts give it flowering boughs for antlers.

Leila A. Wade of Republic, Missouri, extensively studied the snawfus, and reported that it gave off spirals of blue smoke. The blue smoke emitted by the snawfus drifted off and cloaked the Ozark hills in a magical blue haze, which can still be seen in autumn.

The Tripodero of the Californian chaparral and foothills defies all scientific attempts at classification. Its small, strong body stands on two telescopic legs, with a kangaroo-like tail balancing it behind. As its legs can be collapsed or extended at will, the tripodero can stand tall over the brush, or crawl easily through the undergrowth. The tripodero’s face is all nose, with a storage pouch in its left jaw.

When a tripodero sees potential prey from its elevated vantage point, it sights down its snout and fires a clay slug, a supply of which is kept in a cheek pouch. Tripoderos have perfect aim and shoot with pinpoint accuracy. The clay pellet stuns the victim, allowing the tripodero to come in and devour it, bones and all.

Unlike other fearsome critters, the tripodero is associated primarily with construction sites, railroads, and engineering projects.

Treesqueaks make a whole variety of sounds, including vocalizations that evoke the wind in the trees, a cougar’s whine, a piglet’s squeal, and firecrackers at a wedding. These critters of the northern woods are small, prehensile-bodied, and can change color to match the tree they’re on. They look like weasels and are about as friendly as weasels.

Unexplained noises are always the work of a treesqueak.

Moskittos are a cautionary tale about the perils of introducing invasive species. They originated with the Chippewa River mosquitos, which were large enough to straddle a stream, pick lumberjacks off logs as they floated by, and drain them dry. They were so big, in fact, that if caught in such a straddle, they could be tied up and used for bridges.

To combat this menace, Paul Bunyan introduced deadly fighting bumblebees from Texas. These pugnacious bees quickly set about battling the mosquitos and gave the lumberjacks a respite.

Alas, it was not to last. The mosquitos and bumblebees eventually made peace and hybridized. Their offspring had stingers at both ends.

Fortunately for humanity, the “moskittos” had inherited the bees’ love of sugar. They flew out to feed on a shipment of sugar on Lake Superior, and gorged themselves until they were too heavy to fly and drowned.

The greatest hazard of the Colorado mountains is not avalanches or bears, but rather the Slide-rock Bolter. This is a colossal creature the size of a whale. Its enormous mouth, something like that of a sculpin, goes behind its small eyes and ears, and drools copious amounts of thin grease from the corners. The flipper-tail is separated into grappling hooks, which allow the slide-rock bolter to cling to the top of a ridge or mountain.

Slide-rock bolters live where the slopes are steeper than 45°. They can wait for days until prey comes within reach – typically a clueless animal such as a tourist. When a slide-rock bolter spots a tourist, it releases its hook-tail and slides down the slope, lubricated by its grease secretion. It slides like a nightmarish toboggan, bulldozing trees and obstacles, snapping up the tourist, and, carried by momentum, traveling back up to the top of another slope. There it sinks its hooks in and goes back to waiting.

Guides have become increasingly reticent about leading treks through bolter country, as entire groups of tourists can be lost to the behemoths. Slide-rock bolters can be lured away with appropriate tourist decoys – scarecrows with Norfolk jackets, knee breeches, and Colorado guidebooks. One ranger near Ophir Peaks rigged such a tourist decoy with powder and blasting caps, luring in the bolter at Lizzard Head. The detonation scattered enough bolter flesh to feed local vultures for the rest of the season.

Tsé’nagahi, the “Traveling Stone”, was one of the many Anaye or Alien Gods. These primordial monsters were born from unnatural sexual practices, and grew up to ravage and persecute the Navajo people. Tsé’nagahi took up residence at Betchil gai, the Shining Rock, or at a lake where Tsé’espai points up. An enormous mobile stone, it killed people by hurling itself at them. If it saw someone at a distance, it would set off in pursuit, overtaking them if they stood still only to turn around and roll over them.

Nayenezgani planned ahead before coming within range of Tsé’nagahi. When he approached the traveling stone’s lair, he took his black knives and planted them in the ground. Then as he come closer he planted his blue knives, followed by his yellow knives and his serrated knives at closer intervals.

When Tsé’nagahi saw the monster-slaying hero approach, it immediately started for him, hurling itself at him as though thrown by a giant hand. But it rolled over the knives in the ground, which cut slivers of rock out of its body. These fragments became the different rocks used for pigments, each colored based on where it came from: stone from Tsé’nagahi’s bones became white rock, his flesh became blue pigment, his hair black pigment, his mouth and blood red pigment, and his intestines yellow ocher. The moisture from his sweat, mucus, tears, and urine became the wet spots that ooze from rocks today.

Nayenezgani fired off a lightning arrow, and Tsé’nagahi realized it had bitten off more than it could chew. It wheeled around and fled with Nayenezgani in pursuit. The hero continued to knock pieces off Tsé’nagahi as they raced across the land of the Navajo, leaving characteristic geological deposits behind.

In the end the chase led to the San Juan River, where Tsé’nagahi dove underwater. Nayenezgani continued to head it off and attack it – three times he did so, and the fourth time Tsé’nagahi was gleaming like fire underwater. It was virtually unrecognizable as the monstrous rock it had once been.

“Sawé [my baby, my darling], take pity on me”, it implored Nayenezgani. “If you spare me I will no longer harm your people. I will remain in the rivers, I will keep the mountain springs open and supply your people with freshwater”. Nayenezgani stayed his hand. “Very well then”, said the hero, “if you keep this promise I will spare you. But rest assured that if you ever break it, I will seek you out and this time I will kill you”.

Tsé’nagahi kept his promise. From that day forward he was Tieholtsodi, the Water Monster, a soft-furred otter with horns like a buffalo. Tieholtsodi is benevolent and benign; he is everybody’s friend.

O’Bryan, A. (1956) The Diné: Origin Myths of the Navaho Indians. Bulletin 163 of the Smithsonian Institution, Washington, D. C.

The fearsome Sasnalkáhi, the Bear that Pursues, was a monstrous bear that terrorized the Navajo people. As one of the Anaye, Sasnalkáhi was born from unnatural sexual practices; in this case, his “fathers” were a smooth stone and a leg sinew. He lived in a cross-shaped mountain cave at Tse’bahástsit, the “Rock that Frightens”. Once Sasnalkáhi set on a hunt, his prey had no hope of escape.

When Nayenezgani set out to slay Sasnalkáhi, he carried yucca fruit in his left hand and hard oak twigs in his right hand. Those medicinal plants warded off Sasnalkáhi’s attentions.

Eventually Nayenezgani found the bear’s head emerging from a hole. He inspected the east, south, and west entrances; when he got to the north, Sasnalkáhi’s head immediately withdrew, and the bear headed for the south entrance. This time Nayenezgani was waiting for him, and when Sasnalkáhi stuck his head out, Nayenezgani decapitated him.

“You were a bad thing in life”, proclaimed Nayenezgani to the head. “You caused nothing but mischief. But now I will make you useful to the people; you will feed them, clean them, and clothe them in the future”. Sasnalkáhi’s head was chopped into three pieces. One piece was thrown east, where it became tsási (Yucca baccata). One piece was thrown west, becoming tsásitsoz (Yucca angustifolia). The last piece was thrown south, to become nóta (mescal). The nipples became pinyon nuts, while two pieces of fat cut from around the tail became a bear and a porcupine. The left forepaw, gall, and windpipe were taken as trophies. 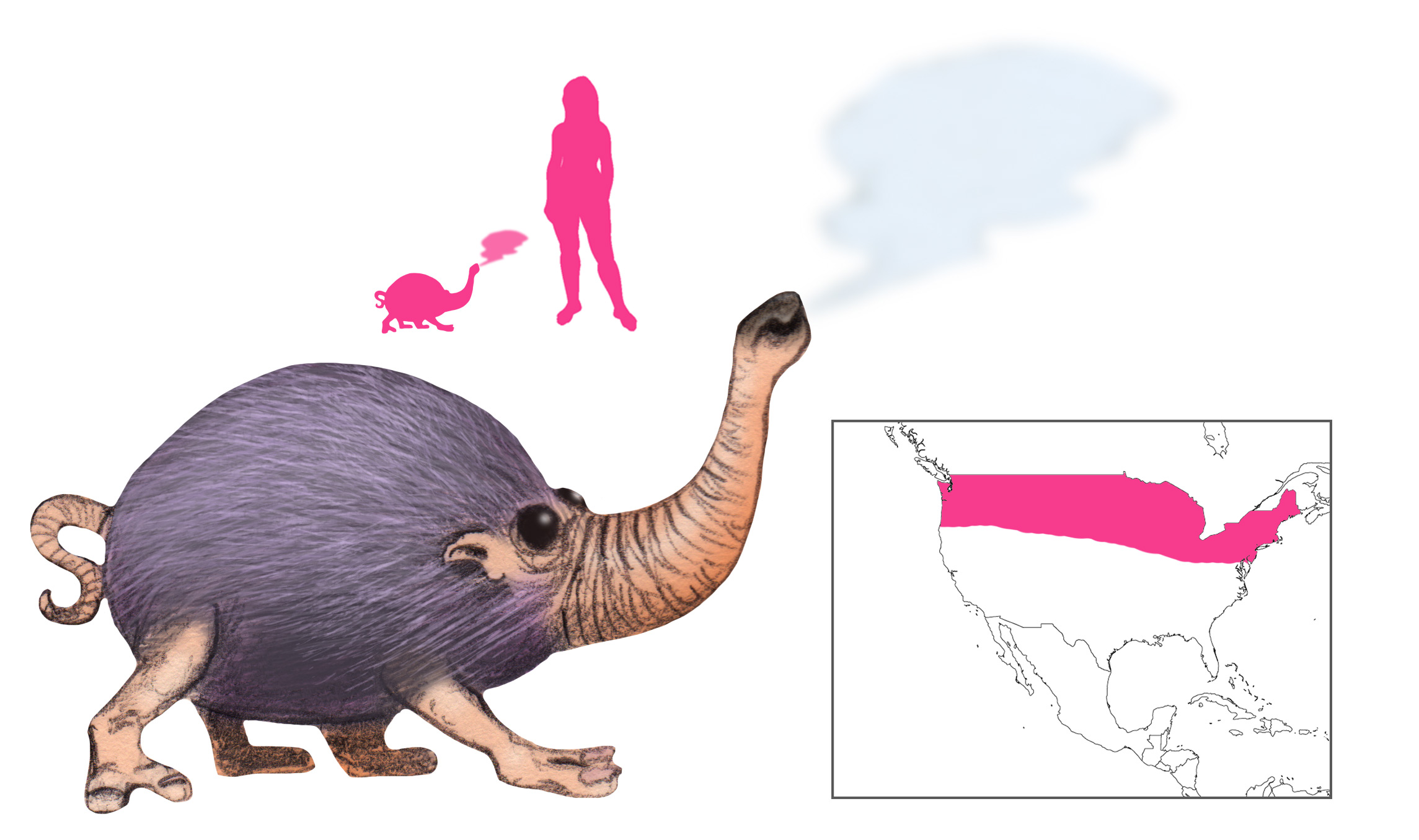 This small Northwoods denizen makes a sound like the whistle of a boiling teakettle. It walks backwards by choice, and clouds of steam come out of its nostrils. Nothing else is known of its appearance as few have ever seen it. 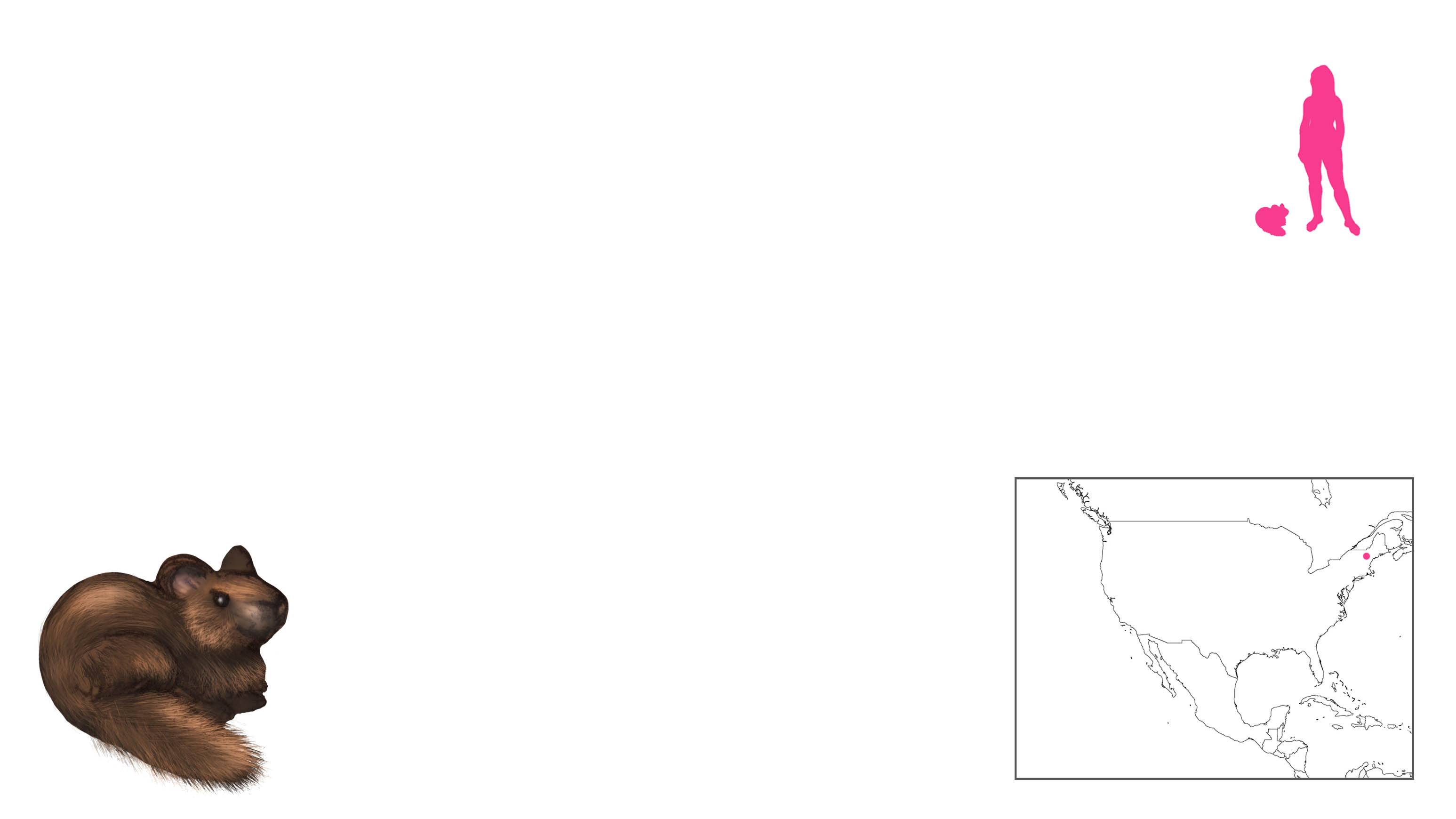 Bravado and surprise are the weapons of the terrifying Come-at-a-body, a native of New Hampshire’s White Mountains. According to a Mr. B. B. Bickford of Gorham, NH, this is a small, woodchuck-like animal with soft velvety fur like a kitten’s. It runs directly at unsuspecting passers-by from out of the brush and comes to a sudden halt a few inches away from its startled quarry. Then the come-at-a-body spits like a cat, emits a mink-like stench, and runs away again. 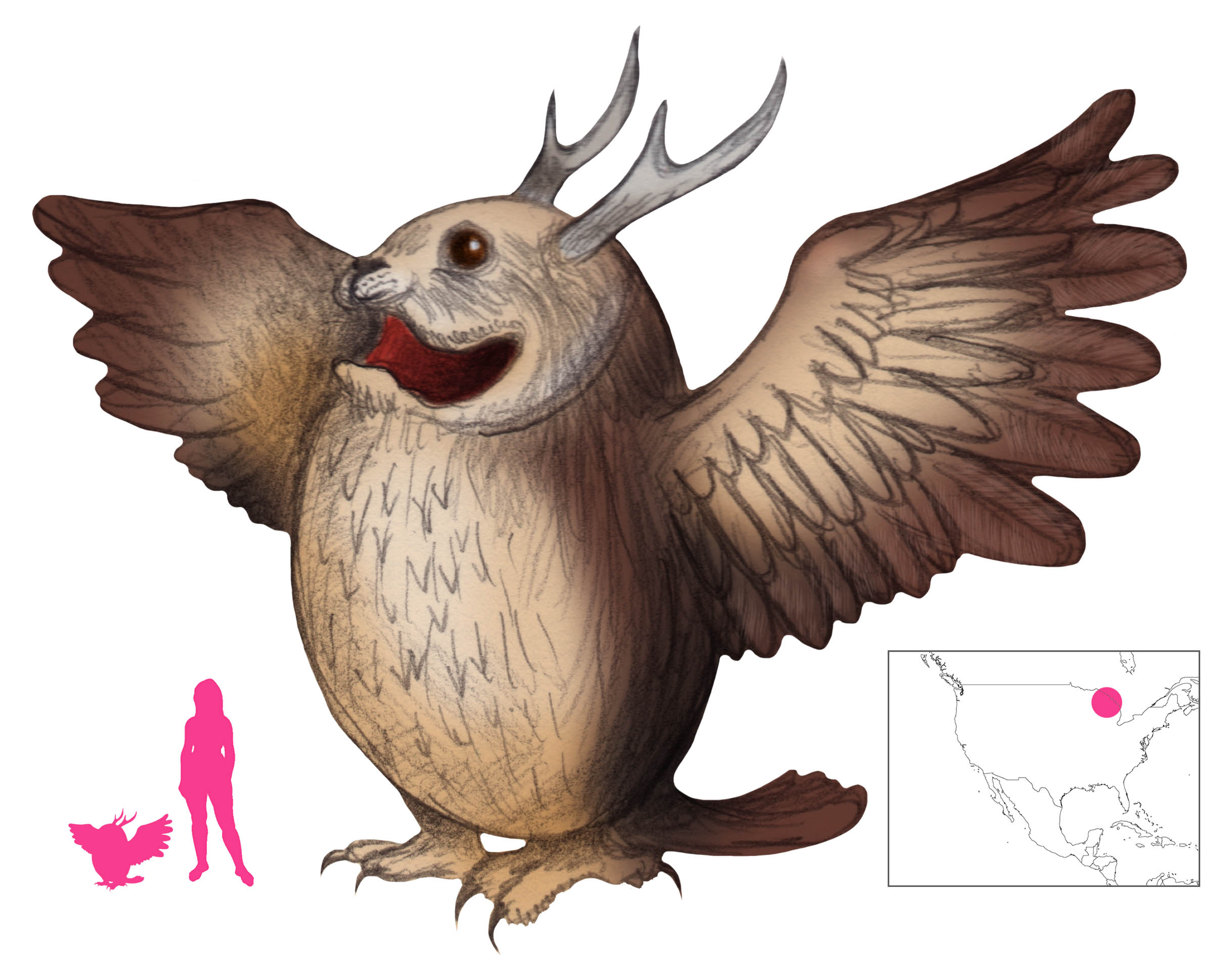 The Dingbat of the Great Lakes region is a terrifying hybrid of bird and mammal. It has a short, feathered body, short antlers, and large wings.

Dingbats specialize in tormenting hunters. During the deer season they catch bullets in mid-air, drink gasoline from hunters’ cars, and otherwise play such pranks as to render the sportsmen’s lives miserable. While they have not been seen recently, it is certain that any seemingly sure-fire shot that misses its mark is the work of a dingbat.

The only known dingbat specimen was exhibited at the Buckhorn Tavern (and House of Science and Learning) in Rice Lake, Wisconsin.

Someone who is different and unusual may be referred to as a dingbat.

The Latin name honors Edith Bunker, who plays a human dingbat in a popular televised documentary.