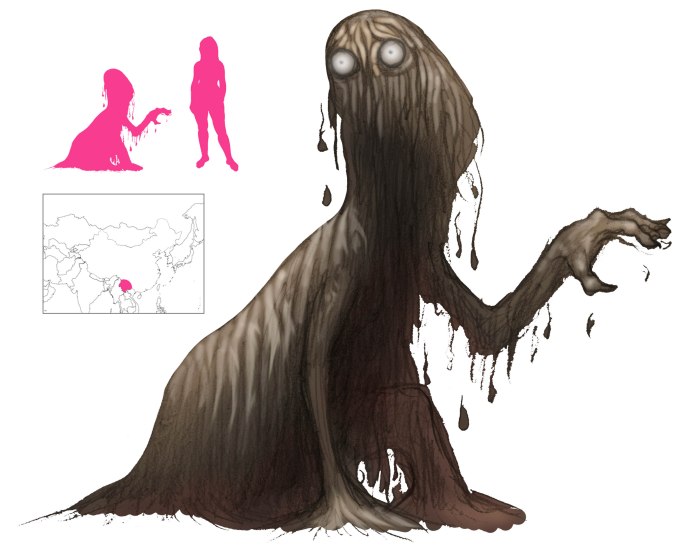 Celestial Stags or Celestial Roes are neither roe stags nor are they celestial. They are Chinese spirits that haunt deep areas, corpse-demons native to the ore mines of Yunnan province. As with numerous other creatures, their name is probably phonetically derived.

Celestial stags are born from the souls of miners unfortunate enough to be trapped deep underground by cave-ins. There the trapped miners are kept alive by the breath of the earth and of the rare metals around them. Their material substance dies and rots away, but their essences cling to life and become celestial stags.

Perhaps because of this traumatic genesis, the primary goal of a celestial stag is to reach the surface. The stag will do anything it can to reach this goal. When a celestial stag meets a miner it is overjoyed and asks for tobacco. Then it begs the miner to take it to the surface. Stags will try to bribe miners by promising them the choicest veins of gold and silver. If this fails they become violent and torture miners to death.

But worse yet is the outcome if their wishes are granted. A celestial stag that reaches the open air dissolves – flesh, bones, clothes, and all – into a pestilential liquid that spreads disease and death.

The only way to escape these creatures is to kill them before they can do harm. If celestial stags are discovered, miners will wall them up in abandoned galleries. Another way out is to promise to haul the stags to the surface in a bamboo lift. Halfway up the rope is cut and the stags plummet to their death – a merciful end to their grim lives.

Borges attributes his account of the celestial stag to G. Willoughby Meade’s Chinese Ghouls and Goblins.