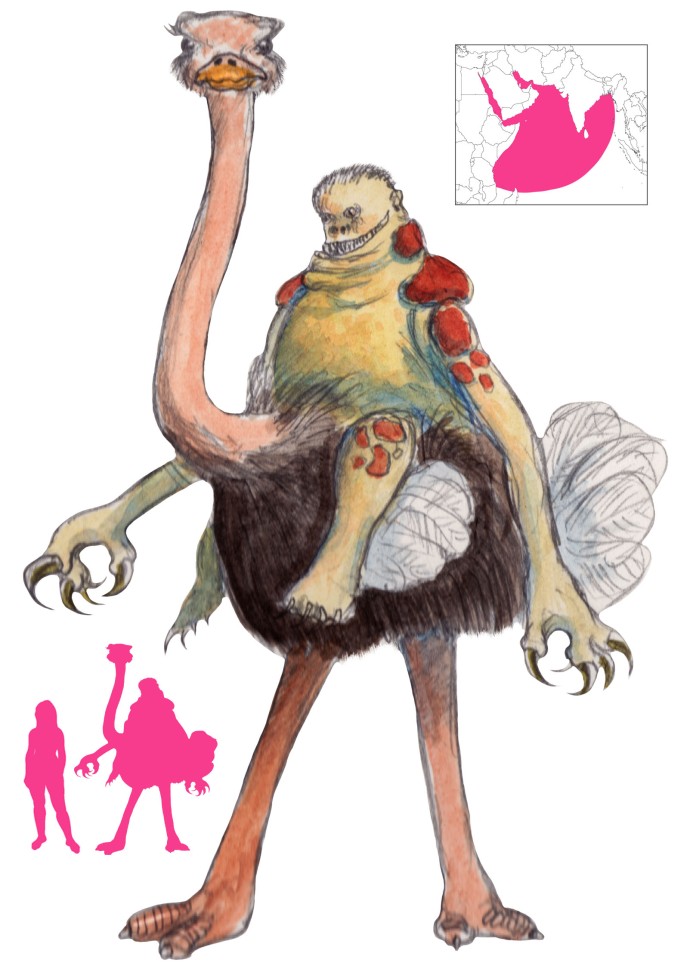 The Dulhath has had a muddled history, with authors disagreeing with each other on the exact name, let alone the appearance. It is first mentioned by al-Qazwini, who refers to the dulhath, but al-Damiri describes it under the name of dulhama, and Bochart reports on the duhlak. Here al-Qazwini’s name has been given priority.

While the original description appears to be al-Qazwini’s, the dulhath’s pedigree probably goes back to jinn who appear as animals – in this case, an ostrich jinni. This in turn led to al-Qazwini’s dulhath as a demon found on certain desert islands, and which resembles a man riding an ostrich. It eats the flesh of humans who have been cast alive or dead into its territory. A dulhath will also invade ships to seek its prey, and when attacked by sailors it speaks loudly in a boastful voice, causing them to prostrate themselves before it. Bochart believed the “boastful voice” to have been some translation error derived from tales of sirens.

The best description of a dulhath is found in the tale of Aboulfaouaris the sailor. Sadly it is all but certifiable, as the creature in question remained unnamed, but its behavior is compellingly close to al-Qazwini’s broad outline. The dulhath that plagued Aboulfaouaris looked like a man of about 40. He had a monstrous shape, a big head, short bristly hair, and an excessively large mouth filled with sharp teeth. Eyes like those of a tiger glared above a flat nose with large nostrils. His arms were nervous, his hands large, and his fingers equipped with viciously hooked claws.

Aboulfaouaris and his crew encountered a dulhath near the island of Java. They saw a naked man clinging to a plank of wood in the sea, calling for help; accordingly the sailors rescued him and brought him aboard ship, where his appearance caused much consternation. When told that he had been narrowly rescued from drowning, the odd man smiled and said “I could have stayed for years in the sea without being bothered; what torments me most is hunger. I have not eaten in twelve hours. Please bring me something to eat, anything, I’m not particular”. An attempt was made to bring him clothing, but the dulhath explained that he always went naked. “Don’t worry, you’ll have lots of time to get used to it”, he added ominously, stamping his foot impatiently. Enough food was presented to him to feed six starving men. The dulhath polished it off and asked for more; the same amount was brought to him and disappeared in short order, and a third helping was called for. One of the slaves, shocked by the creature’s insolence, made to strike him, but the dulhath grabbed him both both shoulders and tore him in half.

All hell broke loose. Aboulfaouaris, sailors, slaves, all descended on the dulhath with sabers drawn, determined to kill the monster. But the dulhath’s skin was harder than diamond. Swords broke and arrows bounced uselessly off his hide. Then they tried to drag him off the ship, but the dulhath sank his claws into the deck, anchoring himself immovably. The sailors were utterly incapable of harming the dulhath. The dulhath, on the other hand, had no such problems as he took one of the sailors and ripped him to pieces with his claws. “My friends, you had better obey me. I’ve tamed worse people than you, and I will have no qualms about having you share the fate of your two shipmates”.

With that the reign of terror began. The dulhath was in full control of the ship, and ate his fourth course while the crew stared in terrified silence. Aboulfaouaris hoped that food and conversation might cause the monster to doze off, but the dulhath smugly reminded him that he had no need for sleep, and none of the soporific tales they told him would have any effect.

All hope seemed lost until deliverance came from the sky. The sailors looked up to see a rukh soaring overhead, and they scattered in fear. The dulhath, however, was unaware of the huge bird, and was standing confidently in the middle of the deck. An easy target! The rukh dove and carried the dulhath off before he could cling to the ship. But the intended prey wasn’t giving up without a fight, and he began tearing and biting into the rukh’s belly. The rukh responded by gouging out the dulhath’s eyes with its talons, and the demon retaliated by eating his way to the rukh’s heart. As it expired, the rukh caught the dulhath’s head in its beak and crushed it like an eggshell. Both monsters plummeted into the waves and vanished.