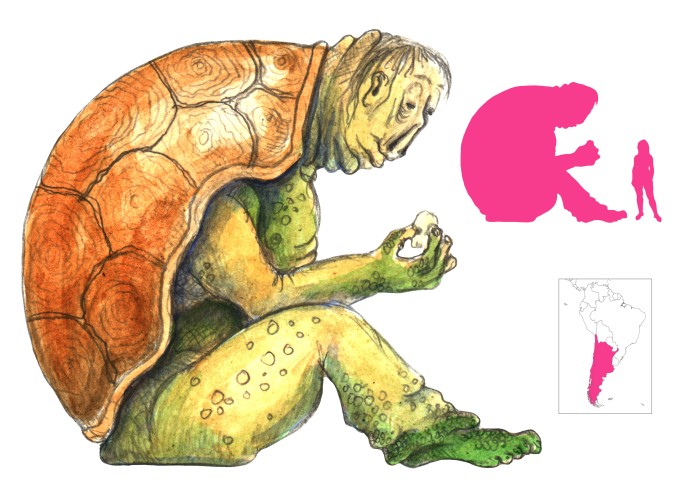 Oókempán is an ogre known to the Tehuelche of Argentina and Chile. He looks like a very large man, but has a shell on his back and moves around on all fours like a pig. Oókempán abducts children, enticing them with a bit of meat before slinging them into a box on his back and carrying them off. Any child playing on their own is at risk of being taken and presumably eaten. Attempts to stop Oókempán will fail, as his hard shell prevents any damage from reaching him; his weakness is in his heel, which is unprotected.

It was Oóuk’en, “truth”, the man incapable of lying, who put an end to Oókempán’s kidnappings. He interceded after a child escaped by grabbing hold of an overhead branch as Oókempán passed under it. Oóuk’en went to meet Oókempán at the top of a cliff. “What did you do with the children?” he asked the ogre. “I took them to increase my people”, replied Oókempán. “I only eat rhea, and I needed them to hunt for me”. After some more small talk, Oóuk’en pushed Oókempán off the cliff, shattering his shell and killing him.

The presence of fossil elephant bones in the region have been seen as evidence of Oókempán’s existence.