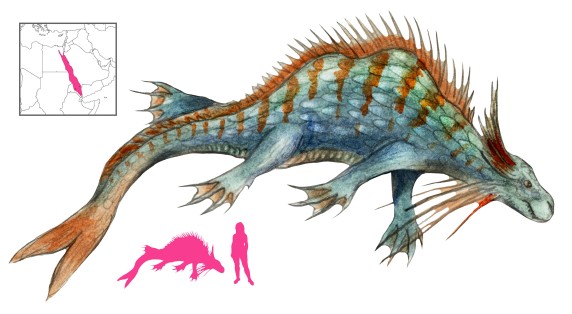 Mount Marzouan, once known as Mount Orabou, was described by Thevet in his Cosmographie. It is home to a small population of Arabs, and the waters of the sea there house a fish known as Orabou, for which the mountain was once named.

Not much is known of the orabou’s appearance. Thevet only states that it is nine to ten feet long, and is plated with armor like a brigandine, although its scales are not as tough as a crocodile’s hide. The depiction of the orabou provided gives it a humpbacked, rather feline appearance.

Orabou flesh is particularly foul-tasting, and Thevet believed that old camel meat and Livonian mastiff were preferable to the execrable orabou. Eating it also results in kidney and bladder stones. Despite that, the inahabitants of Mount Marzouan eat it anyway, treating their stones with a diuretic concoction of orabou fat, two handfuls of false gold dust, and cyclamen.

Paré takes the orabou from Thevet, but misspells its name as the phonetically-similar “orobon” and its locality as “Mount Mazouan”. Ever the embellisher, he also adds that it is extremely ferocious towards other fish.

The orabou may have been inspired by crocodiles, although Thevet makes a distinction between the two. Another possibility is a monitor lizard, like a similar creature encountered by Sir Andrew de Toulongeon and Pierre de Vaudrei in the desert of Palestine. It was a three-foot-long green lizardlike animal covered with sturgeon-like scales, having feet like the hands of a child, a head like a hare’s, and a long lizard’s tail. It made sounds like a cat, and was feared by the Arabs accompanying the knights. Naturally this affront to the natural order was promptly slain.