The name Rhox indicates similarity to a grape. It may be the same as the spider known as rhogalida or “grape-spider” on Crete, although nobody is quite sure what a rhogalida is either. Aelian places it in Libya, but it is otherwise described as a common Mediterranean spider.

In any case the rhox, as described by Nicander, Philumenus, and Pliny, is a sort of spider or phalangion. has a toothed mouth in the middle of its stomach and short, stubby legs that move in succession – a description more reminiscent of a millipede or centipede than a spider. It is smoky or pitchy black in color. Its venom is instantaneously deadly, and known symptoms include web-like strands in the urine.

The short legs may be a misinterpretation, as the description and lethality both suggest the malmignatte or Mediterranean black widow. 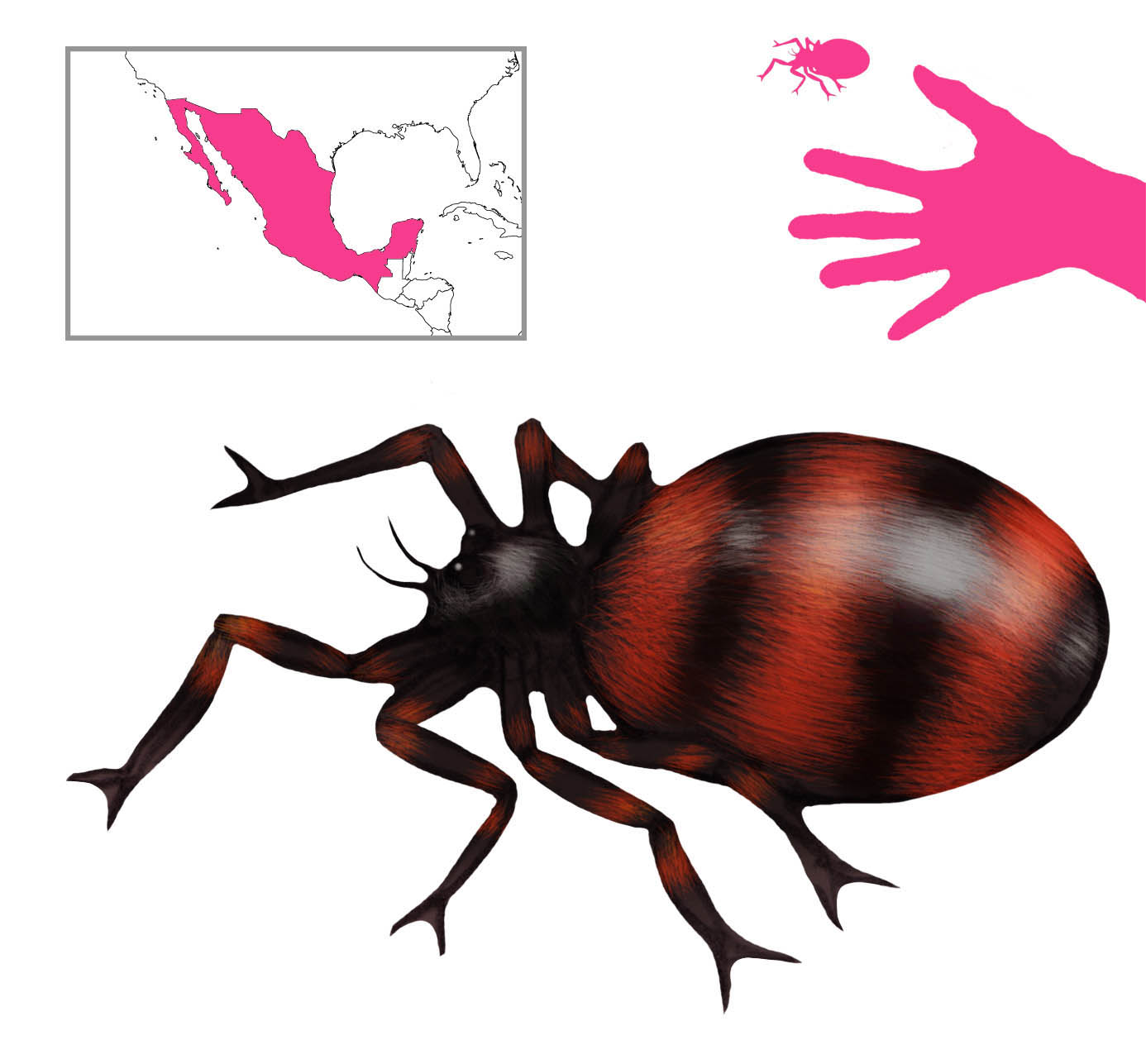 The Pinaviztli is an insect of ill-omen known to the Aztecs. It looks like a spider the size of a mouse, smooth and hairless and fat-bodied, red and black in color.

The entrance of a pinaviztli into a house is a bad omen. It can be countered in one of two ways. The first is to draw a cross on the floor pointing to the four cardinal directions. The pinaviztli is placed in the middle, spat on, and asked, “Why did you come? I want to know, why did you come?” If it goes north, it is a sign of coming death. Any other direction heralds a lesser affliction. The insect is told “Go your way, I don’t care about you”, and it is dropped off at the nearest crossroads.

The second ritual consists of passing a hair through the pinaviztli’s body and tying it to a stick, leaving it dangling for a day. If it is gone by the next day, then harm is sure to befall the household. If it is still there, the people spit on it and are reassured that nothing will happen.

Sometimes a pinaviztli foretells the gift of good food.

The Tetragnathon, “four-jawed”, is described by Classical authors as a sort of phalangion, or harmful spider. It is so fearsome that the people neighboring the Akridophagi (locust-eaters) were driven away by swarms of tetragnathons emerging after heavy rain.

Philoumenos describes two forms of tetragnathon. One is flattened, whitish, rough-legged, with two growths on its head at right angles that give the impression of four jaws. The other has a line that divides its mouth across the middle, producing four jaws. Pliny specifies that the most dangerous tetragnathon is the one with two white lines crossing in the middle of the head; the other is ashen-colored shading to white towards its abdomen. Either way the tetragnathon is deadly, biting when sat upon, but its venom can be cured by fresh spring water.

The tetragnathon is probably a solifuge, a spider-like arachnid with enormous chelicerae. It is nonvenomous, but its huge pincer-like mouthparts – easily interpreted as two sets of jaws – can deliver a painful bite.