Skate in Iceland are mystical creatures. Saint Peter recognized them as the holiest fish in the sea, and they are intimately connected with the number nine. A skate has nine good qualities and nine bad. It will watch over a drowned man for nine nights, and spend the next nine nights eating him. A skate will carry its young within her for nine months, then lie upon them for nine weeks, during which a stone grows within them. This stone, the “skate-stone”, could make a man invisible for one hour, or relieve labor pangs. Empty mermaid’s purses, or “Peter’s purses” as they are known, have lost their skate-stones.

Most terrifying of all is the Skötumóðir, or “Skate Mother”. Like the other Icelandic “fish mothers”, they are not necessarily skate themselves; in fact, some accounts describe them as evil whales that resemble skates. They are enormous and toxic to eat, with backs like mud-covered islands, and sport nine tails. Unlike regular skate, they have been found inland, in freshwater, and even on dry land.

There is always a swarm of skate swimming around a skötumóðir. As they are caught by fishermen, the sea seems to get shallower as the skötumóðir rises to the surface. Finally, the vengeful skate mother hooks its wings onto the gunwales of the boat, and drags it below the waves.

To evade a skötumóðir, prompt action is required. When the huge ray latches its wings onto the boat, they must be immediately chopped off with whatever sharp implement is handy. This will effectively neutralize the threat.

An enormous skate, no doubt a skötumóðir, was one of three monsters terrorizing people around Lagarfljót, lying in wait at ferry crossings. It was transfixed to the bottom of the river by a powerful sorcerer, and unless it has escaped, it is there still.

The Selamóðir, or “Seal Mother”, is the protector of the harbor seals and grey seals of Iceland. It is called by seals when persecuted, or it may appear of its own accord to defend its charges. Unlike most seals, it can be found inland as well as at sea, in freshwater and saltwater.

Seal mother or not, a selamóðir is a monstrous sight. It is like a seal in general appearance, but of “unusual dimensions”, “terrifying size”, or simply the size of a large foreign dog with short legs. It is reddish-pink in color (perhaps with a red neck), with flashing eyes and a back like an island. There is a tuft of hair, like brushwood or heather, between its eyes.

Seal mothers may be found wherever seals gather, and ferociously attack anything that approaches their “children”. There is one report of a selamóðir charging out of the sea to scare off would-be seal hunters, and others of selamóðirs swimming upriver.

A selamóðir was also one of the three monsters inhabiting the Lagarfljót river. It slept under the waterfall, and was much feared until it was vanquished and transfixed to a rock. 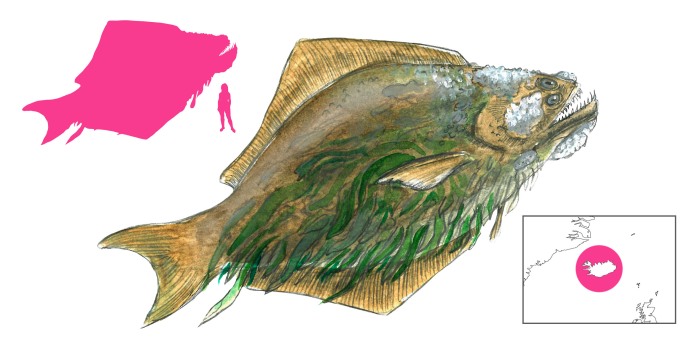 The Flyðrumóðir, or “Halibut Mother”, is fairly representative of the Icelandic móðirin, the “mothers” of certain species of fishes. These creatures look like huge, monstrous versions of their namesakes, and they protect their smaller kin fiercely.

A flyðrumóðir looks like the halibut it protects, but it is much larger, growing to the size of a fishing boat. Its body, which turns grey on both sides with age, is covered with shells, barnacles, and seaweed, making it look like a small island when it surfaces.

While the flyðrumóðir has been said to be the mother of all fishes in the sea, its true “children” are the halibut. It is followed by schools of halibut out at sea, and it protects them if they are persecuted. A schooner in Faxaflói attracted (and escaped) the attention of a flyðrumóðir after it hauled up 40 halibuts. Another fishing boat owned by Archdeacon Hannes Stephensen was less lucky; it caught a flyðrumóðir on a coffin-nail hook, but was capsized by the halibut mother with all hands lost.

Even catching a flyðrumóðir is not necessarily a good thing. After the halibut mother of Breiðafjörður was snagged on a golden hook and filleted, the waters of the area ceased to produce fish, and the angler who caught the giant halibut never again caught a fish in his life.

Similar fish mothers include the freshwater Laxamóðir, “Salmon Mother” and Silungamóðir, “Trout Mother”. Both of these resemble oversized salmon and trout, respectively. Salmon mothers will swim out of salmon-rich rivers, tearing through fishing nets along their way. The big-headed trout mothers are bad luck to catch, and should be released whenever possible.