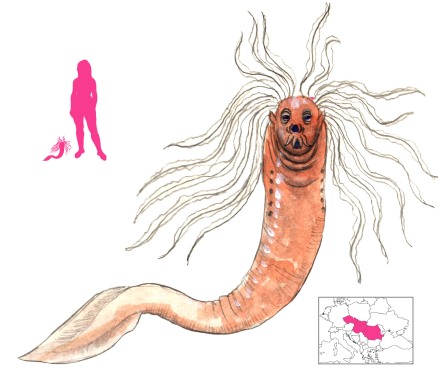 Lilyi is the second child of Ana, Queen of the Keshalyi. Like her siblings, she is responsible for an array of ailments that plague humanity, and she had her genesis in the abusive relationship between Ana and her repulsive husband, the King of the Loçolico.

After the birth of Melalo, Ana understandably refused to have another child. But this time it was Melalo himself, desirous of a wife, who told his father to cook a fish in donkey’s milk, and administer a few drops of the liquid in Ana before taking her by force. The product of this vile union was Lilyi.

Lilyi, “Viscous” or “Slimy”, is mermaid-like, part fish (some sources specify hagfish) with a human head. Nine sticky threads or barbs flow from either side of her head, and they can penetrate a human body, causing buildup of mucus. She is responsible for catarrh, coughing, dysentery, influenza, vomiting, and other diseases involving mucus and discharges.

Her union with her brother Melalo produced further demons of disease, but she was herself persecuted by her younger brother Tçulo – at least until Tçulo got a sister-wife of his own.