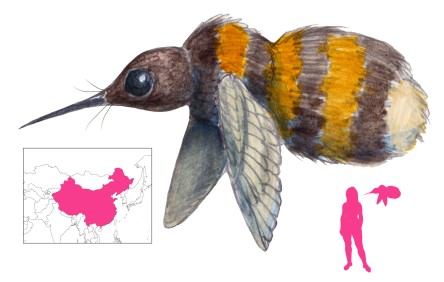 Mount Kunlun is the Pillar of Heaven, a place of great energy and endowed of a fiery brilliant aura. Four rivers – Black, Red, Yellow, and Oceanic – flow from Mount Kunlun, and the mountain is administered by the god Luwu, or the Queen Mother of the West Xi-Wangmu in later texts.

Many wonderful birds and beasts dwell on Mount Kunlun, including the Qinyuan or Qinyuan-bird. It looks like a bee, but is the size of a mandarin duck. Its sting is venomous enough to kill other animals and to wither trees.

Despite the classification as a “bird”, Mathieu believes it to be simply a large stinging insect.