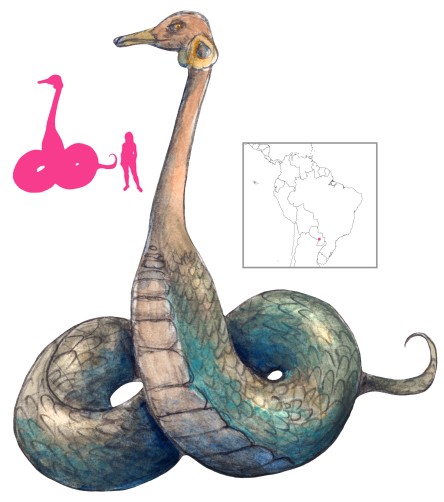 The Falajitax snakes are both violent ogres and benevolent rain-bringers. The Makka of Paraguay believe that they come from humid areas and bring the water with them wherever they go. Most falajitax live in the Chaco forests.

A falajitax has a head like that of a rhea. When it rears up with its body out of sight, it looks exactly like a rhea, and fools many hunters into coming too close. It wears earrings. Its massive serpent body is beautifully colored with eye-catching stripes. But a falajitax need not stick to one form, as it can assume any appearance it wishes, including human and equine guises. A falajitax disguised as a horse can tempt people into riding it, galloping with them into a lake where they drown.

At best, the falajitax are intelligent creatures that can be reasoned with by shamans. Falajitax often protect sources of honey in the forest, and the shaman can placate them by singing and soothing them with a sort of balm. A group of Makka and their shaman were permitted to harvest honey, and the falajitax next guided them to their secret stores of honey. The snakes finally appeared in the shaman’s dreams, telling him that they would live in peace with the Makka.

The falajitax that chased a rhea-hunter was much less friendly. With its head raised, it would beckon him to approach, then lie down and roll up as he came closer. When he discovered the deception, he rode off at full speed, with the falajitax following close behind, jumping from branch to branch like a monkey. When the hunter reached a burned field, the falajitax stopped moving, for such places are unpleasant to the snake. The man returned with other villagers and killed the helpless falajitax, taking its beautiful skin, but after they hung it out to dry it started to rain. The torrential downpour stopped only after they had thrown the skin away.

At worst, the falajitax are little more than anthropophagous monsters. They often swallow people alive, but victims can escape by cutting out the serpent’s heart from within – a difficult proposition, considering that a falajitax has multiple decoy hearts around its neck, with the real heart located in its tail. It took two days for one hunter to find the falajitax’s heart and slay it; by then, his hair and clothes had been dissolved and his skin was decomposing. Fortunately for him, his wife’s magic comb restored him to health. But if the falajitax decides to kill first, then there is no escape. The snake constricts its prey to death and then introduces its tail in its victim’s anus, making it walk like a macabre puppet.