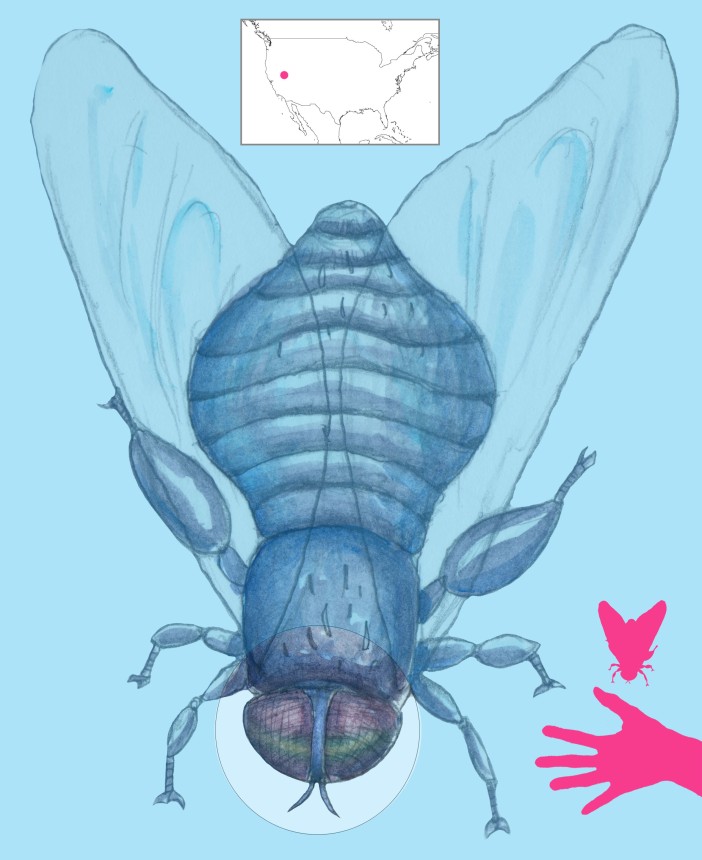 Noted journalist, humorist, and spinner of tall tales Dan De Quille introduced the Shoo Fly to the world in the October 14, 1870 issue of the Territorial Enterprise. Since then, attempts to find a representative type specimen of this remarkable insect have failed.

Shoo flies are large aquatic flies native to a shallow warm lake fourteen miles northeast of Mud Lake in Washoe County, Nevada. They were discovered and appropriately named by prospectors. A shoo fly is black in color, four inches long and with an abdomen three inches in circumference. The transparent wings resemble those of a horsefly and produce a ten-inch wingspan. Shoo fly larvae are deep green in color, six inches long and four inches wide, and feed on rushes; after roasting they look like sweet potatoes and have a vegetable taste, making them prized food commodities.

Swarms of shoo flies buzz over the waters of the lake and under it. The flies can go underwater and produce an air bubble that forms around their heads. With this organic scuba gear, the flies can stay underwater indefinitely.

One dead fly was brought back to civilization by the prospectors, where it was displayed dangling from a string in Piper’s Saloon at the corner of B and Union streets. But when a San Francisco entomologist volunteered to identify the insect, suggesting that it may be a hymenopteran (bee or wasp) rather than a dipteran fly, De Quille pointed out that the snow storm blew all the flies into their lake, and the proprietors of the saloon refuse to part with their attraction. Furthermore, he added – tongue firmly in cheek – that based on the shoo fly’s “cuspidated tentacles” and the “scarabaeus formation of the thoracic pellicle”, he believed it to be “a genuine bug of the genus “hum””.