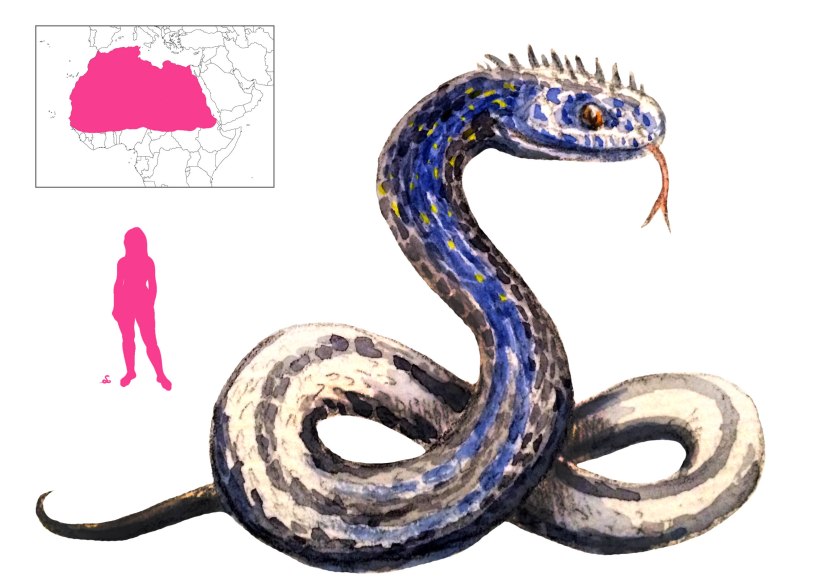 The Dipsas – “thirsty” or “thirst-causer”, among its many names – was one of the deadly snakes encountered by Cato’s army in the African desert. It was feared for its venom, which induced unquenchable, desperate thirst in its victims. Aelian and Aldrovandi believed it to be the same as the prester, a conclusion which Topsell disputed.

Aelian points out that the dipsas is white with two black stripes on its tail; Topsell mentions its black tail and black-and-yellow spots on its anterior; Aldrovandi pictures it with longitudinal black and white stripes and prominent scales on its head. Dipsades may be found near sources of water, including springs and marshes, and they will also lie in wait in ostrich nests.

The small size of the dipsas makes it easy to overlook, and its bite is painless; its victims often are oblivious to the cause of their unnatural thirst. The venom seeps into the bones, sets fire to the organs, absorbs vital fluids, and parches the tongue and throat. Sometimes victims are driven to drink so much that their stomachs explode; if there is no water around, they eventually succumb to internal burning.

Lucan describes the effect of a dipsas bite on the Roman standard-bearer Aulus, bitten after he accidentally stepped on a dipsas. No amount of water could quench his thirst, and, after trying in vain to drink up a river, he tore his wrists open in a last-ditch effort to drink his own blood. His suicide was practically a mercy.

Aelian mentions a tale told where a donkey, charged by Zeus with bestowing immortality on mankind, stopped by a spring to drink. That spring was guarded by a dipsas, which refused to allow the donkey to drink until it had given it the secret of immortality – and since then, the snake sheds its skin and rejuvenates itself, while humans, much like the unfortunate Gilgamesh, lost their chance at eternal youth. This story was also told by Sophocles and a number of other authors. Dipsades also guard a spring in the Pharsalia, and Cato (correctly) points out that snake venom is harmless in water. In both of these cases, we have the dipsas causing thirst not by its bite, but by denying access to water.

The descriptions of dipsas venom may be close to the actual effects of some snake venoms, notably the burning sensation and the parched throat. Nowadays Dipsas refers to a genus of New World snakes that only pose a threat to snails and slugs.