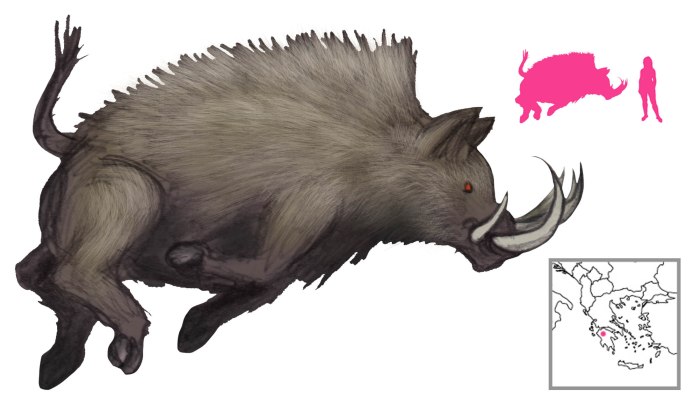 The Erymanthian Boar was a monstrous boar that made its home around Mount Erymanthos in Arcadia. It ravaged the land of Psophis, killing people and livestock and tearing up crops.

Heracles was commanded to bring the Erymanthian boar alive for his fourth labor. Along the way the demigod had an unfortunate and tragic encounter with the centaurs, one which would have severe repercussions in the future. Eventually Heracles found the boar and scared it out of its thicket with a mighty shout. After a long chase, the boar was tired out and and forced it into a snowdrift, where it was easily captured and brought back to Eurystheus. In a comic scene that graces many a Grecian urn, the cowardly king hid in a large storage jar until Heracles took the boar away.

After that the boar presumably met its demise, either at the hands of Heracles or elsewhere. The tusks of the Erymanthian boar were on display at the sanctuary of Apollo in Cumae, Italy, but Pausanias believed this claim to be highly dubious.