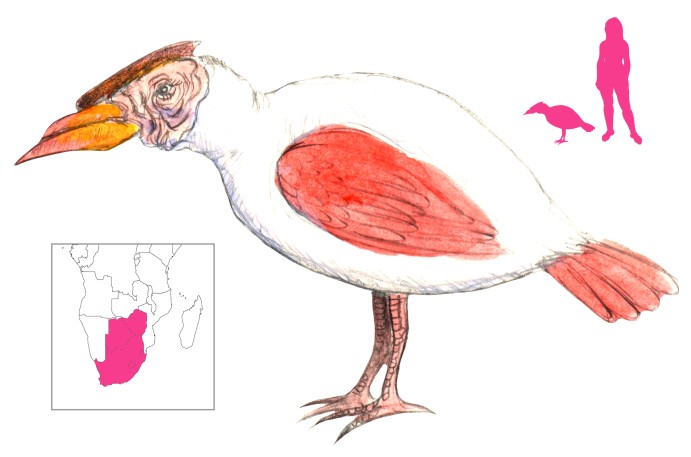 The Lightning-bird, spirit of storms and clouds, takes a number of forms in southern Africa. Several familiar birds are associated with storms: the ground hornbill, the hamerkop, the bateleur, various birds of prey. The Amandebele refer to both the “bird of heaven” and the white-necked fish eagle as Isivolovolo, which flies at great altitude and whose droppings are potent magical ingredients. To the Baronga it is a hawk called Chimungu, which buries itself in the ground with every stroke of lightning. The Tumbuka lightning-bird is black with a curling tail like that of a rooster, scars people with its claws, and leaves little scarlet insects behind after a storm. In Buziba it is a whole flock of glittering red birds whose flashing feathers cause lightning and their wingbeats thunder.

The Impundulu or Intakezulu of the Xhosa is probably the best-known of the lightning-birds. It may appear as a human, but only women can see it in its true form, which is white with red wings, red legs, and a short red tail. Various remains have been identified as belonging to an impundulu, including a ground hornbill’s skull, a dead wandering albatross, a cattle egret, a peacock’s tail feather, and a strange avian skull with the penguinlike lower mandible protruding beyond the upper mandible. The last is not identified, but the description leaves little doubt that the African skimmer Rynchops flavirostris is to blame. Altocumulus clouds have also been identified as impundulu.

The beating of the impundulu’s wings causes thunder, although it only starts thundering after the appearance of the large mushrooms in the wet season. Lightning is caused by an impundulu rushing to the earth to lay a single large egg underground. These eggs must be found and destroyed by shamans before they hatch, lest more impundulus be brought into the world. Throwing assagais into the air also helps dissuade impundulus from landing.

Impundulus are vampiric, sucking human blood until their victims die. They will also carry off unprotected children. Milk is another substance impundulus are fond of, and poisoned milk can be used to exterminate them. Witches are believed to have impundulus who do their dirty work, sending them out to kill men; the fat of an impundulu can also be used in sorcery. Impundulus in human form will impregnate women, and their children will be birds. Tuberculosis is caused by an impundulu sucking away sufferers’ breath, and goes by the same name in West Pondoland.

A person with a nosebleed can be described: wanyiwa yimpundulu, “he has been sucked by impundulu”. Another proverb, “he/she has caught the chicken of impundulu”, refers to one having a stroke of good luck.

In more modern times impundulu has become the name of an electric tram-car.

Cook, P. A. W. (1931) Social Organisation and Ceremonial Institutions of the Bomvana. Juta and Co. Ltd., Cape Town and Johannesburg.