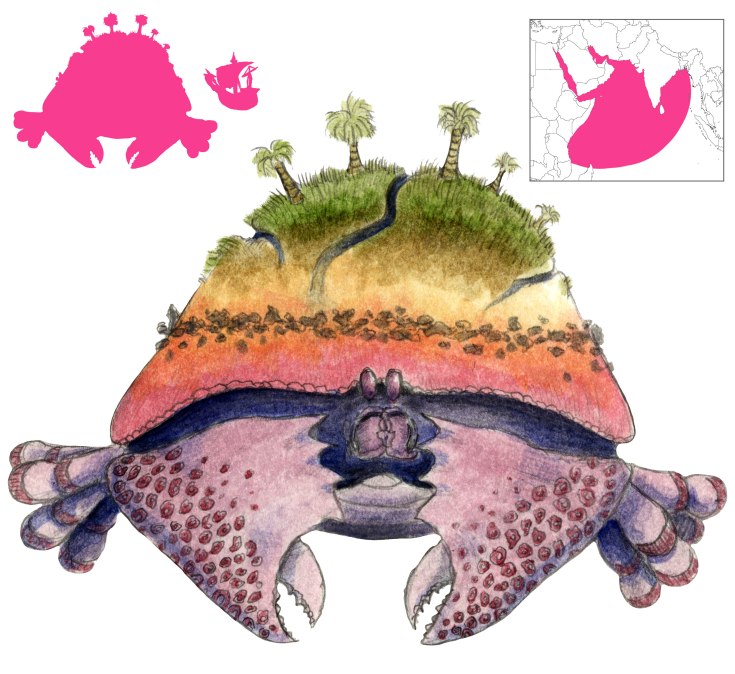 Saratan is Arabic for crab. It also means cancer, in the same way as cancer is Latin for crab. Hence, every use of the word saratan here can be replaced with “crab”.

Al-Jahiz knows what crabs are. He talks about how crabs have eight legs and two “teeth” which give the appearance of ten legs. They have eyes on their back. They live in water or burrows on the shore, where they lay their eggs, and feed out of greed instead of necessity.

But the “crab” he describes at one point is enormous in size and lives in the open ocean. Vegetation grows on its back as it rests on the surface. Cracks and crevices in its shell look like gullies and rivers. It is this monster that sleeps in the middle of the ocean until sailors land on it, mistaking it for an island. Then it awakens and dives underwater, drowning anyone incapable of swimming back to ship.

Al-Jahiz does concede that he cannot find anyone who claims to have seen this monster.

“What is the most wondrous thing you have ever seen?” Al-Jahiz and a group of friends ponder this question. “The elephant”, comes one response. “The soul”. “Sleep and awakening”. “Forgetfulness and memory”. “Fire”. “The belly of the cosmos”. Another of the scholars present expresses his amazement with the elephant. Finally, Ma’bad bin ‘Omar states “The saratan and the ostrich are greater miracles than the elephant”.

It is strange that the saratan is popularly known as “zaratan”, and described as a whale or turtle. The blame for this lies with Borges, who describes the saratan’s activities but neglects to mention that it is a gigantic crab. He quotes a Spanish translation of Al-Jahiz by Palacios which converts saratan to “zaratan”. Oddly enough, the English translation of Palacios’ text uses the more reasonable transliteration of “sarathan”. In either case, Palacios does describe this monster as a “certain crustacean of the sea” (“cierto crustaceo maritimo”), a fact that Borges omits.