Is this an “Art of ABC” or a “Making of ABC” entry? It could be both, so I went with Art because it’s all about the art.

Part of my job in making ABC entries is painting the illustrations. And like every semi-competent artist I despise everything I do. But sometimes I think I’m really missing the mark with a painting, and decide to start over for a number of reasons. What might those be? Let’s take a look at some dishonorable discharges.

Some do-overs are simple. I decided the first Aloés I painted (top) just wasn’t interesting enough. Too generic, primary-colored, and simple. Too flat. And the “pear-shaped” crown, well… let’s just say it looked like crap. 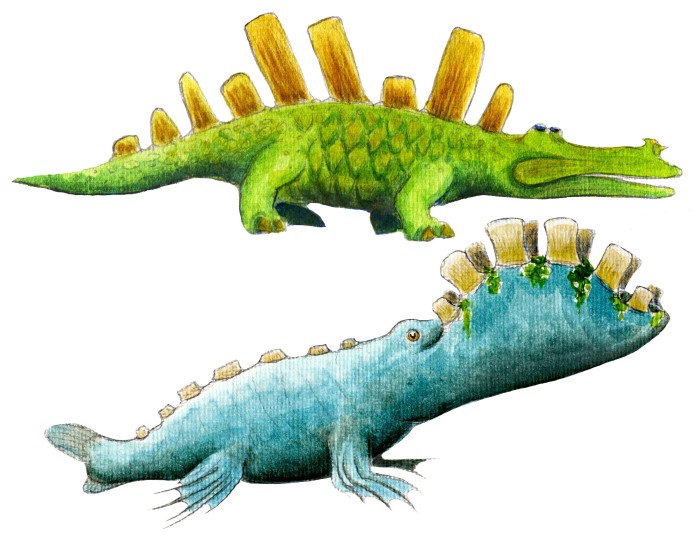 The Mbielu-mbielu-mbielu was painted during a time when I wanted to be as creative as possible. When I set out to draw the creature with planks on its back, I originally made the top image, taking the planks to heart. But it didn’t seem creative enough at the time. After consulting with my housemate at the time (who is definitely one of the Top 5 People I Respect The Most), the suggestion was “why not teeth that look like planks?” So I went with that and made the hippo-mesoplodont you see below. But now, in retrospect I’ve been trying to keep ABC depictions more “conventional” to go with the research, so I included a sketch in the entry that combined both.

One thing was for sure: I was not going to paint a stegosaur.

I’ve also been trying to push back against things made up by other authors, in a bid to go back to the roots. The Pilou has no description, just the fact that it makes noise. Dubois saw fit to describe it as a dormouse-elf, and I wanted it to be different. I decided to do a sort of fuzzy jumping spider creature, seeing that those are a lot cuter than dormice, but it couldn’t seem to work for me (left). I eventually threw in the towel and made a dormouse creature anyway. It’s me, I’m part of the problem…

The Pyrallis has been incorrectly described as a dragon-insect following Woodruff’s lovely image of one, so I definitely wasn’t doing that. The creature described almost certainly was a moth drawn to flame, but that wasn’t as interesting. Maybe a firefly? That’s on fire, after all. A tail-glowing scorpionfly with a lit match for a proboscis? Now we’re talking!

I redid this one due to material issues. I had been using textured watercolor paper, and at the size which I did it, the texture overwhelmed a lot of detail (top). So I repainted the whole thing on newly purchased hot-pressed watercolor paper, the fine grain doing a much better job (bottom). I do think the lighting turned out better in the original though. Look at how bright it turned out!

This one’s a lot simpler. The original Shoo Fly I thought was really simple and generic, with only a snorkel-proboscis as a clue that it lived underwater. So I took the head and thorax of a horsefly, the flattened abdomen of a botfly, and took some cues from the awesomely-named Strashila incredibilis to round out the portrait of the submarine fly.

When I describe ABC as “my life’s work” and “years in the making”, I’m not even exaggerating. As mighty acorns grow from tiny trees, so the origins of ABC can be found in the humble doodles of an overenthusiastic kid determined to put knowledge to paper. In around 2nd or 3rd grade I decided to compile an “encyclopedia” of monsters. This encyclopedia took the form of a blank copybook which I filled with creatures, mostly from my imagination, with some springing from mythology or even movies, TV shows, and picture books. I then went on to fill about 7 more of those copybooks over the next few years. Turns out I had been working on the proto-ABC since I was 9, and I didn’t even know it.

Reproduced below for the first time are what 9-year-old me thought the 3 main Anaye looked like. I’ve come a long way 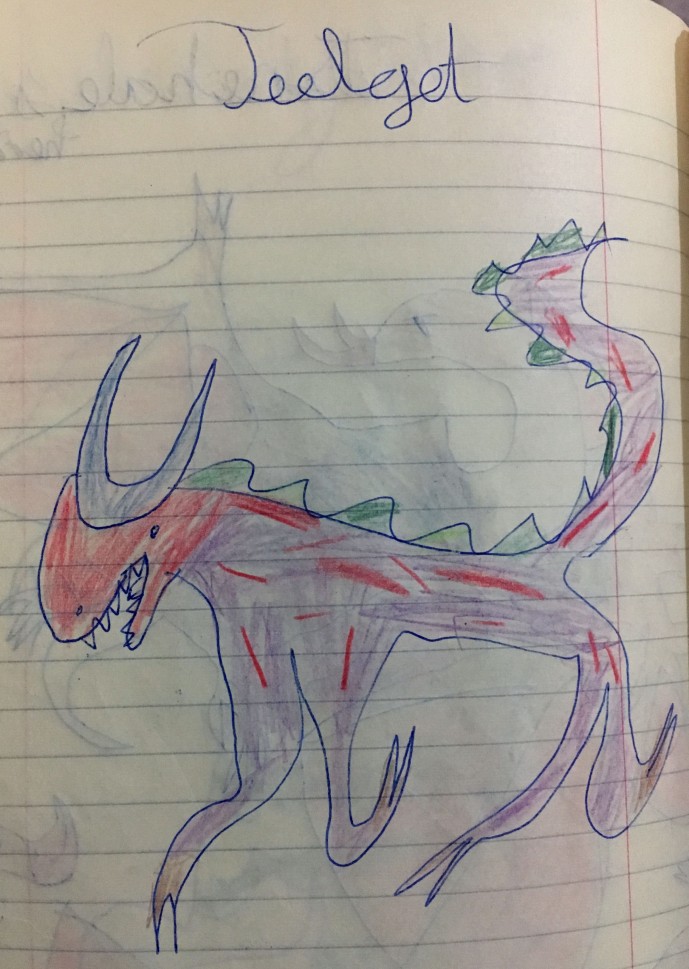 See, I only knew Teelget was a carnivorous antelope, I didn’t know it had no head as well.

I apparently also did not know what the term for a lot of birds is, and I couldn’t spell Tsenahale to save my own life.

And Yeitso looks like he crawled out of the Black Lagoon.

Last time on the Making of ABC, I discussed the importance of following a breadcrumb trail of references back to its source. This implies a significant amount of scholarly research. But I don’t want to discount another major source of creature discovery; namely, serendipity*.

Sometimes you don’t find the creature, but it is the creature that finds you. And for creatures to find you, you have to do a lot of reading of books both digital and physical, a lot of exploring in libraries and bookstores old and new. And I’m not talking about online bookstores, I’m talking about brick-and-mortar, real-deal, honest-to-goodness secondhand bookstores where the wonderful scent of books hits you as soon you go in, and where you can spend long, happy hours finding things you never knew you needed. I have made a number of discoveries merely by reading, whether in my home, in libraries, or in bookstores**. Caspilly surfaced in an old Larousse book on the sea. The Swan Valley Monster lurked in a corner of a used bookstore in Pennsylvania. The dreaded Wheel of Balsaeg, the unspeakable Boongurunguru, and the vast Trolual and Ziphius were found for the first time in a children’s book of mythology. The list goes on.

In summary, I guess what I’m trying to say is

So next time you’re looking around in a bookstore full of books that nobody wants, you may yet find the next big thing. Who knows?

As promised, this is going to be the first in a hopefully long-running series of official Wednesday Interludes. Due to popular demand, these will be covering a number of behind-the-scenes topics, including research, bestiary reviews, and my favorite obscure pop-culture monsters.

The first Digression will be a simple one. I have often been asked* “where on Earth do you find these things?” My answer is, inevitably, I follow the breadcrumbs. As any academic will tell you, references are everything, and every claim should be taken with a grain of salt the size of Uluru**. An unreferenced book is practically useless, but as long as there’s one reference, I can follow the trail of literary references back to its estranged home. Often there’s only one ultimate origin from which all the others sprung.

Google Books and Hathitrust have been a godsend in this regard, as has access to a university library*** and fluency in three languages. I have also had a number of wonderful friends and acquaintances (you know who you are) who helped in translating different texts**** where I couldn’t. But, once again, it all involves following the breadcrumb trail to its source, even though some breadcrumbs end up taking on a life of their own.

One good example of this process was brought to me by notable monster hunter Fredrik H., who suggested:

And I wonder if you know something more about … that five-legged Celphie bovine.

Now there’s a start! A strange creature – the beginning of our breadcrumb trail. What is this Celphie*****?

Like the vast majority of creatures you can find online, the Celphie comes from Carol Rose’s Giants, Monsters, and Dragons. I will reserve my thoughts on it for the official review, but suffice to say that it’s the progenitor of most online information of this kind. And sure enough, page 71 informs us:

This is a monstrous hybrid creature in the traditions of medieval Europe. It was described as having a body resembling a cow but with five legs, each of which was human from the elbow down to the hands… said to inhabit the wastes of Ethiopia… (Rose, 2000)

That is definitely monstrous. Where is it from? Rose provides a single reference – Barber and Riches’ A Dictionary of Fabulous Beasts. Following that trail gives us:

Curious Ethiopian beast which had man’s hands for its five feet; its hind-legs from the ankle to the top of the calf were also human. The rest of its body was that of an animal similar to a cow. (Barber and Riches, 1971)

Curiouser and curiouser. There is no mention of medieval Europe – and sure enough, the solitary citation directs us to The Excellent and Pleasant Work of Julius Solinus Polyhistor, translated by A. Golding in 1587. That breadcrumb is as follows, just pretend I put a [sic] after every word:

Almost about the same time also were brought from thence monsters called Celphies, whose hinder feete from the ancle upp to the toppe of the calfe, where like a mans legge, and lyke-wyse hys forefeete resembled a mans hande: notwithstanding, these were never seene of the Romaines but once. (Golding, 1587)

So apparently the good folks of Rome****** got to see Celphies brought back from the wilds of Aethiopia. Note now that Celphies have legs like a man’s legs up to the knee, and arms like a man’s arms in the same way. There is no mention of five legs, a cow’s body, and human hands everywhere. Something must have been lost in the adaptation, the breadcrumb must have crumbled somewhere along the way. But the description is getting clearer. It couldn’t be…? But there’s one more ancient, dusty breadcrumb to tackle – the original Solinus book, De Mirabilibus Mundi. There we get our final hint (with apologies for bad Latin transcription):

Another translation quirk? The original Latin refers to Cephos instead of Celphies, and now it all falls together*******. Human-like limbs, taken from Africa… Celphies are unspecified primates! As further verification, Topsell provides an additional, delicious breadcrumb:

The CEPUS, or Martine Munkey. The Martin called Cepus of the Greek word Kepos, which Aristotle writeth Kebos, and some translate Caebus, some Cephus or Cepphus  or more barbarously Celphus… such being alwayes the most ingenious imitators of men… The games of great Pompey first of all brought these Martines to the fight of the Romans, and afterward Rome saw no more; they are the same which are brought out of Aethiopia and the farthest Arabia; their feet and knees being like a mans, and their forefeet like hands, their inward parts like a mans, so that some of us have doubted what kind of creature this should be… it having a face like a Lion, and some part of the body like a Panther, being as big as a wilde Goat or Roe-buck, or as one of the Dogs of Erithrea, and a long tail… (Topsell, 1658)

And there you have it. The breadcrumbs got weirder and moldier the farthest we went from home, starting with a monkey and ending with a five-legged-cow-thing. Sometimes my research does the opposite, though, and the original ends up stranger than the modern conception!

Either way, it’s all done citationally, my dear Watson.

Barber, R. and Riches, A. (1971) A Dictionary of Fabulous Beasts. The Boydell Press, Ipswich.