Reallllly stretching the definition of “modern” here, but I wanted to bring this up in some form anyway. Back in the grim darkness of July 1900, Pearson’s Magazine ran an article by Herbert C. Fyfe and illustrated by Warwick Goble. It was somewhat ominously titled. 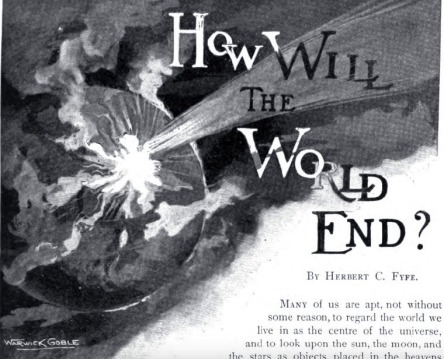 The article in question covered a whole bunch of a different catastrophic ends that could befall the world (and specifically humanity), with a lot of reference to H. G. Wells, of course. Below is Goble’s rendition of the “loathsome animals” inhabiting the frozen world of the far future. They’re not so loathsome to me though, considering they look like The Muppet from the Black Lagoon. Cute actually!

But the most memorable image from the story is what I’ve come to call the Lobsterpocalypse, or “the extinction of man by the enormous increase and spread of a lower order”, or otherwise a really odd misunderstanding of evolutionary timescales. And the most terrifying creature that could do this? A crab.

Fossil remains of crabs, 6ft. in length, have been discovered, and such enormous creatures might – owing to some cause or other – multiply exceedingly.

If we imagine a shark that could raid out upon the land, or a tiger that could take refuge in the sea, we should have a fair suggestion of what a terrible monster a large predatory crab might prove. And, so far as zoological science goes, we must, at least, admit that such a creation is an evolutionary possibility.

Then there are the cuttlefish, the octopus, and other denizens of the deep, any of which might conceivably grow in numbers, and extinguish man.

Goble, however, draws neither crab nor cephalopod, instead placing a huge monster lobster (mobster?) front and center about to make sashimi out of well-dressed turn-of-the-century beachgoers. Accompanying it are a sea serpent and – horror of horrors – a Galapagos tortoise.

I for one welcome our new crustacean overlords.