How did you do? Did you guess correctly? There were some great prognostications for this weird sea serpenty thing, with the thing coming out of its head identified as a blowhole spouting water or an oarfish’s frilly crest.

It’s neither. It’s made of flesh and it’s sticky.

Think you can handle the truth now?

This creature is a Reversus Indicus, an Indian upside-down fish. You probably know if better as the humble remora.

That’s right. This is what a remora looks like in real life.

How did it end up looking like the thing at the top? For a start, the strange fleshy blowholey umbrella coming out of its head is an extremely confused rendition of the remora’s suction disc, as seen below. 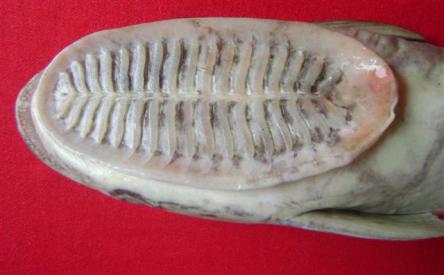 Second, it’s derived from an account of fishing using remoras (specifically that of Christopher Columbus, itself probably spurious). Remoras have historically been leashed with ropes and sent to adhere to fish or turtles. Then all you have to do is reel ’em in! But somewhere along the line this “hunter fish” got interpreted as this big eel aggressively seizing other sea creatures. Notice how it’s sticking to a seal, and there’s a sea turtle nearby (it’s next).

And, of course, since remoras often stick upside down to other animals and have generally weird anatomy, we ended up with the reversus, the reversed fish.

Moral of the story is never underestimate just how much people can get confused about an animal’s appearance.