The Unprecedented Discovery of the Dragon Islands (or TUDDI for short) by John Kelly and Kate Scarborough is a book which I remember very fondly. I first saw it as a child in a bookstore that no longer exists, and my memories of it got so fuzzy that I eventually became convinced I had dreamt it up. Searching for “realistic dragon book”, “living trap monster”, and similar terms led nowhere. Eventually, by some quirk of fate I searched Amazon for “dragon island” and checked the results for the 90s… and there it was. I hadn’t imagined it after all. And since it’s mostly pictures, I’m covering it under Obscure Modern Monsters rather than ABC Reviews (needless to say I give it 5 gigelorums).

You needn’t search for it as you can buy it here and here. 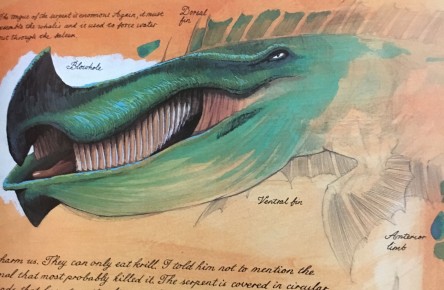 TUDDI is a big, colorful coffee-table book for children of all ages. It presents itself as the illustrated diary of young Lord Nathaniel Parker as he and his ship get lost at sea, and end up finding a fabulous archipelago where dragons and sea serpents exist. Lord Parker writes to Belinda, his main squeeze, and a lot of TUDDI’s humor comes from his stuffy aristocratisms. The book ends all too quickly and suddenly – sequel hook? It certainly feels like the authors could fill several more “episodes”, but sadly I don’t think they have (if you’re the authors and you’re reading this, take note).

The main reason you would want to read TUDDI as fans of ABC, mythical creatures, speculative biology, speculative evolution, and all-around great art, is the creatures. Some are new takes on old classics, while others are completely new organisms with no equivalents. Even speculative insects and plants are painted in loving detail.

Above you can see TUDDI’s take on the sea serpent. An enormous, sea-going reptile convergent on the whale, complete with baleen. Lord Parker and his friends find a dead one on the beach with ominous sucker markings on its body…

I’ll just give a small sample of what’s inside. There are unicorns. There are griffons, which hunt in packs, feed on the unicorns, and make a go at our heroes. There are giant ratites with faces that look like the old duck-rabbit illusion. There are carnivorous plants. There are Cambrian relict arthropods. There are aquatic-adapted shrew-things.

The gorgon is an all-original creation and one of the things I remember most from the book. It’s literally a living bear-trap, one that lies camouflaged amid tree roots and snaps shut on whatever steps on it. It’s a nasty piece of work, and I like that a lot of it is left to the imagination. We’re not even sure what it evolved from, but I’m guessing some kind of primate?

Of course, it wouldn’t be the Dragon Islands without dragons, would it? The dragons themselves are marvelous organic balloons, big pink bloated floating translucent fire-breathing plankton-straining gilled soarers. They’re exactly as awesome as they sound.