The last time we discussed a short-lived car toyline with a biotechnological post-apocalyptic plotline, it was in the mid-90s. This time our story takes us to the late 80s, when French toy car manufacturer was in a bit of bind.

As mentioned in the Carnivores entry, superhero toys – I mean, action figures were all the rage, and more traditional toy companies such as die-cast car makers were losing the battle. Majorette, founded in 1961, was in decline, shutting down branches and cutting corners by replacing die-cast chassis with plastic and hinged doors with fixed ones. The company went out of business in 2000 and was bought by Smoby, but not before it tried to reinvent its brand and appeal to the modern demographic.

The Extranimals were one of those ephemeral experimental lines, designed to alleviate Majorette’s problems in every way. These car/animal hybrids were both cheaply made and had a (flimsy) plot set in a post-apocalyptic wasteland, meant to attract action-oriented children while being easy to manufacture. They even got two commercials on TV, and an audio cassette (little more than a dramatic retelling of the first commercial). The American release was called Wild Wheels, but I’ve never seen those. Unfortunately the Extranimals suffered from low advertising, lack of backstory, and no cartoon, which is why they lasted for two years before vanishing into obscurity. Today they can be found in the dystopian hellscape of Ebay, where they command monstrous prices.

Image below taken from this excellent French site.

The brilliant idea behind the Extranimals was that they required very little work on Majorette’s part. The car bits were taken directly from models already in production, allowing them to repurpose surplus die-cast stock. The chassis, monster truck wheels, and animal parts were plastic, with the animal parts vacuum-metallized in chrome or gold.

The main gimmick of the line was that the wheels could be adjusted into different positions, allowing the vehicle to tackle different forms of terrain. As far as toy gimmicks go, this was a very lukewarm one, especially considering the competition in the form of, say, car that transform into robots. Do note also that the cardback below, for the Mustang, also makes sure to advertise the Elephant, the biggest and most expensive toy in the line. The makers took no chances. 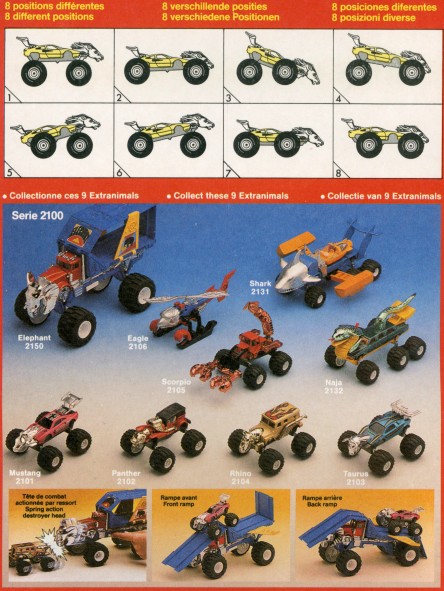 The plot cast our vehicular animals in a not-so-distant future where humanity has gone extinct and the world has become a jungle of concrete, twisted rebar, and encroaching vines. In this world animals have melded with vehicles – or is it vehicles that have evolved animal features? – and wage endless battles for survival in the wasteland. There is no characterization besides the commercials suggesting that the Mustang and Elephant are the good guys.

The original line (1988) consisted of 4 “basic” Extranimals and the “jumbo” Elephant. The basics were 4 variations on a theme, coming in several colors at the same size and with the same adjustable-wheels gimmick. The Mustang was made out of a Ferrari and Taurus was a Lamborghini (and if you have no idea why, look up the Ferrari and Lamborghini logos. Go on, I’ll wait). The Rhino was evidently an armored truck, and the Panther for some reason was an Excalibur (maybe it was meant to be a Panther de Ville?).

The Elephant, on a truck chassis (only the red cab is die-cast), was the largest and doubled as a car carrier for the smaller vehicles. In addition to the wheels, it also had a spring-loaded head that could knock over anything in its path, allowing for plenty of play value and hours of fun smashing things. With the second color variation in blue and red, the Optimus Prime parallels are even more striking. 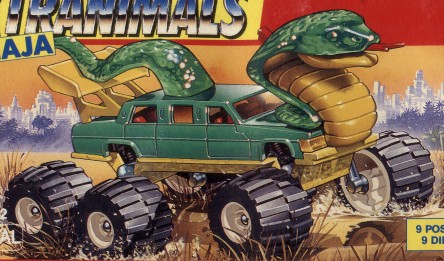 By the second wave of Extranimals of 1989, Majorette had apparently figured that they couldn’t sell the same sort of toy four times even with different animal heads attached, so the “medium” newcomers were a diverse lot with unique gimmicks. The Naja (cobra) above, for instance, was chromed in green and had a movable tongue and doors in addition to 6 configurable wheels. Its base was Majorette’s stretch limousine. 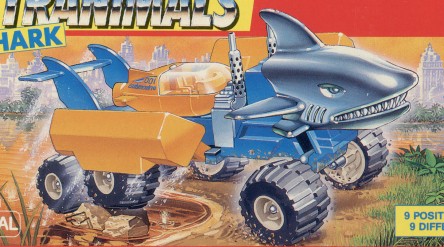 For the Shark, Majorette used their submarine truck as a base, kept the submarine, and added deployable floats. I always wondered why the submarine itself wasn’t shark-themed, and that was because it was unchanged from its original release. No idea why – I always thought it was some sort of symbiotic sentient organism dependent on its larger host for survival. Or something. I used to make stuff up as a kid.

The Scorpion had plenty of play features, with a ball-jointed stinger tail, a scoop that can be raised or lowered, and swiveling pincers. This one evolved from a loader.

Finally, the Eagle is the odd one out of the group, swapping its trademarked wheels for spinning feathered helicopter blades and grasping talons. Its ancestor was a Gazelle helicopter.

I still have memories of seeing those in toy stores, and I always wondered if I hadn’t fabricated the memories out of a deep-seated desire for post-apocalyptic vehicular beasts. It took a while to find them. I still think they could have been an interesting series had Majorette invested more into plot, characters, and production quality, but the series is long gone now.