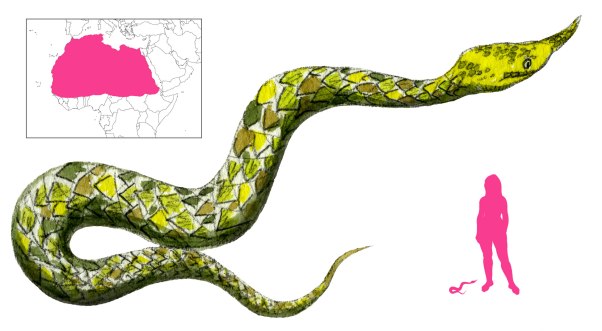 The Seps – “putrefaction” – is a deadly snake found in the deserts of Africa. It is especially feared for its corrosive venom, which melts flesh and bone alike to leave its victim a smear on the ground. Lucan awarded it the title of Libya’s greatest plague.

A seps is about two cubits (about a meter) long, and varicolored along its length; some say it can also change color like a chameleon. It uniquely has four hollow fangs in its lower jaw. Topsell attests to its speed, describing its motion as going “by spires and half-hoops”, possibly a reference to sidewinding. Aldrovandi gives the seps a horn on the nose and large triangular scales. Seps can be found in valleys, deserts, and under rocks. They can survive winters thanks to their natural warmth.

Seps venom is highly virulent, causing massive necrosis and putrefaction of tissues. Skin, muscle, blood, bone – everything rots and dissolves away, and if the bite is not treated, the victim literally melts into oblivion, leaving nothing behind. Eldred points out that the original Greek seps killed in the same way as the dipsas – by inducing extreme thirst. Lucan alters that to better suit the snake’s name.

For antivenin, Topsell recommends the same measures as with other venomous snakes, as well as sponges soaked in warm vinegar; a concoction of ashes, butter, and honey; or otherwise millet, honey, bay, oxymel, and purslane.

Lucan describes the fate of a Roman soldier after being bitten by a seps. The unfortunate Sabellus’ skin, flesh, and sinews shriveled away from the bite, exposing bare bones before they, too, succumbed to the venom. The putrefying venom worked its way upward from the bite, and the soldier melted like a candle.

While no snake has venom as powerful as that of the seps, the symptoms of seps bite seem to be an exaggeration of actual necrosis caused by snake bite.